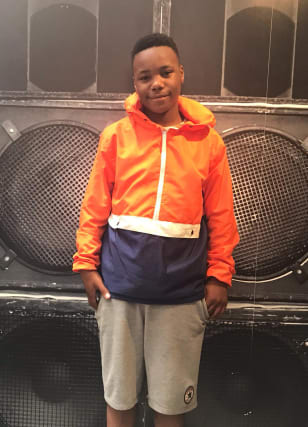 Police are hunting five suspects involved in the murder of a 14-year-old boy who was rammed off his moped and stabbed.

Five men in a black B Class Mercedes smashed into his moped before three of them got out and stabbed him more than seven times.

Speaking at the scene of Jaden’s death on Tuesday, Detective Chief Inspector Chris Soole said the community is “up in arms” about the “particularly barbaric” death.

He said: “They are as disgusted as we are regarding this crime, this tragic, cowardly crime, as, quite rightly, a community up in arms about the death of a 14-year-old boy should be.”

Officers are returning to the scene of the crime on Tuesday evening, one week since Jaden’s death, to appeal for witnesses.

They will also visit Carlisle Road, where the Mercedes was dumped.

Appealing for the media to respect the privacy of Jaden’s grieving family, Mr Soole said: “God only knows what they’re going through as a family with the death of a 14-year-old boy killed in tragic circumstances.

“The death of anybody is a tragic incident anyway, but the death of a 14-year-old does shock to the core.”

Pictures have emerged on social media of Jaden posing with wads of money, and claims have been made that he was involved in drug dealing.

It was reported that he was excluded from school for social media posts.

Mr Soole said: “A lot of people, especially in the age of social media, are very quick to make a judgment on a person’s character, often with third party information.

“They make these judgements not really knowing Jaden or indeed his familial or social circles.

“I’m focusing on the death of a 14-year-old boy and those responsible, and bringing those people who are responsible to justice as quickly as I possibly can for Jaden, for his family.”

Investigators are appealing for anyone with information to come forward.