‘Do your duty’: Non-league Boreham Wood urge MPs to vote down Brexit deal 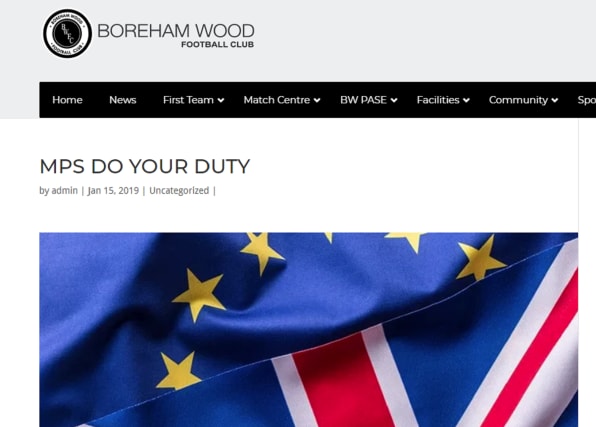 A non-league football club has issued a plea to MPs to “do their duty” and vote against Theresa May’s Brexit deal.

Boreham Wood of the Vanarama National League, English football’s fifth tier, posted the near 1,500-word essay on their club website ahead of Tuesday’s vote on the Withdrawal Agreement.

“The United Kingdom voted to exit the European Union, and if democracy in all our four countries within our union is to work and thrive, then the majority have spoken,” the post read. “It’s now time for MPs to do their jobs and do their duty and firstly vote NO.”

The article, which listed no author, urged MPs to seek an extension of Article 50 in order to negotiate a new Brexit deal or to prepare for a no deal exit.

It also cited the words of Winston Churchill before singling out the “cowardly and now unseen” David Cameron for criticism.

“Borehamwood FC this is the most embarrassing thing you’ve done since losing 8-0 to Arsenal pre-season,” Mr Lammy, a Tottenham fan, tweeted.

“So let’s have a deal: I won’t tell you how to play football if you don’t tell me how to represent my constituents!”

Others were more playful with their criticism. Fellow football club Doncaster Rovers Belles, who play in the third tier of women’s football in England, responded with a satirical statement entitled “We do not have a message for our MPs”.

“We at Doncaster Rovers Belles were going to write something about Brexit here like Boreham Wood FC apparently decided it was a good idea to do,” the club wrote on their website. “But then we remembered that we’re a football club, not a Medium blog.”

Other clubs, including Derry City, Altrincham and local rivals Stevenage, teased Boreham Wood with gifs and emojis which implied they did not think the Brexit comment was a good idea.

“Yeah, but think of how long it will take to get to @DoverAthletic with the backlog of lorries,” the club tweeted. “It already takes us 8 hours.”