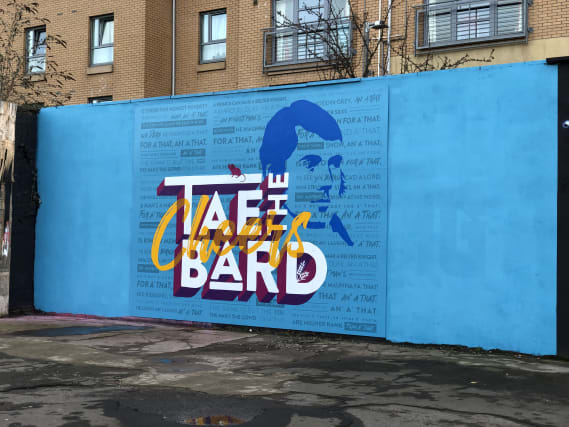 A new mural celebrating the work and legacy of Roberts Burns has been unveiled in Glasgow.

Scottish lettering artist Craig Black produced the Tae The Bard piece at SWG3, focusing on one of the most famous works: A Man’s A Man For A’ That.

It comes as part of the Burns Night 2019 celebrations more than 200 years after the death of the Ayrshire poet.

Black said the final 12ft by 16ft mural was not his first idea but was still “extremely proud” of how it turned out.

He said: “We originally planned to have a stencil and create the poem in the background and spray-paint it.

“If it was on my own it would have taken me half a day but unfortunately it didn’t work pretty well.

“The last day came and I had a lot of pressure to get it done so I reached out to nine or 10 amazing designers to come and help me hand-paint it all, which was fantastic.

“I couldn’t have done it without them. It’s great to see it in all its glory.

“I kind of thrive under pressure to be honest. Even in the four days we did it, it was always challenging to get the type to line up across boards and stuff like that.

“We had to use exterior paint for outdoors as well. There’s multiple different elements that goes into these murals so it’s really good to see it there.”

The mural is on display in the courtyard of the events space and arts venue among other pieces including graffiti street art.

The man behind the latest edition though remarked on how it broadens the appeal to a wider demographic – much like Burns himself.

Black added: “I’ve heard some great stuff already, especially because a lot of the work here is street art.

“I’ve had a lot of street artists come in and getting their thoughts on it is really interesting.

“They actually love it, which is pretty cool. I can’t wait to show it to the public now.

“We chose this poem as one of Burns’ famous poems that kinda related to me as well in terms of his honesty and relatability to the everyday person.

“It’s a ‘cheers to him’ and what he’s done over the past 200 years, and his work’s still so prominent now.”

“It just brings together modern artistic creativity and innovation with the poetry of Burns bringing out some of the key lines of his work.

“To have it here in this really vibrant part of Glasgow is excellent in that it’s going to be so many people, but also marries up that sense of Burns being something that’s contemporary but also connected to our past.

“I think Burns does appeal to all demographics as will this piece of art, that’s because Burns’ work and the celebration of it on Burns Night is essentially about people coming together.

“This mural and the launch of the #TaeTheBard campaign is all about doing what we can to come together to celebrate Burns Night.”