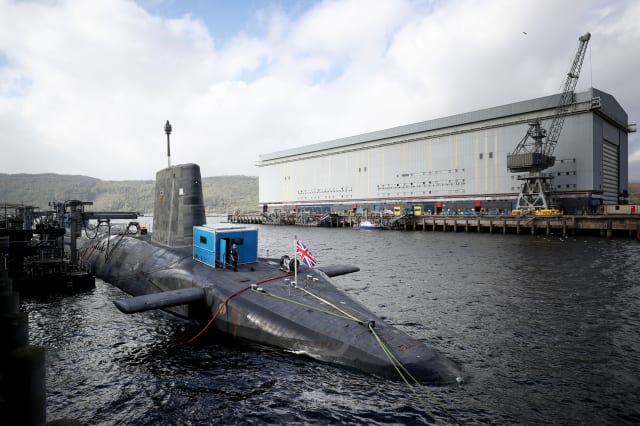 More than 700 nuclear safety events have been recorded at Scotland’s nuclear bases since 2006, the Ministry of Defence (MoD) has said.

A total of 789 nuclear safety events were recorded at HM Naval Base Clyde at Faslane and nearby Royal Naval Armaments Depot Coulport in the 12 years between 2006 and 2018.

Earlier the MoD disclosed 505 incidents had taken place at Faslane, where the majority of the UK’s nuclear submarine fleet is based.

Now, a further letter shows 284 incidents took place at Coulport, where the nuclear warheads are stored and loaded onto the submarines, in the same period.

In the letter, Mr Andrew said: “I would wish to reiterate that the identification and reporting of these low-level events and near misses is actively encouraged in line with International Atomic Energy Agency guidance for protecting people and the environment… since such data can provide valuable lessons to help avoid more significant events.”

A Category A incident took place in 2008 when water overflowed from a now-decommissioned primary effluent barge.

Category A events have “actual or high potential for radioactive release to the environment of quantities in excess of IRR99 notification limits”.

The incident was reported to the Defence Nuclear Safety Regulator and the Scottish Environmental Protection Agency and the assessed release to the Gare Loch was less on 0.0001% of the base’s approved annual discharge levels.

Earlier, the MoD listed two Category A incidents at Faslane, from 2006 and 2007.

However, the minister said that in “neither event was any radiological contamination evident”.

He continued: “None of the events caused harm to the health of any member of staff on the Naval Base, or to any member of the public.”

Mr Andrew said that the MoD takes all incidents, no matter how minor, “extremely seriously” and that they are investigated with appropriate measures put in place.

In response to parliamentary questions from Ms Brock, the MoD also disclosed there have been 22 fires on its nuclear armed or nuclear powered submarines since June 2015.

“It’s a shocking record of accidents and incidents in places where the most dangerous weapons on the planet are,” Ms Brock said.

“We already knew that there were 505 nuclear safety events on board submarines while they were berthed at Faslane and now we find that there have been another 284 in other locations at Faslane and at Coulport where weapons are handled.”

She added: “One bad accident would be enough to wipe Scotland out and the safety record is appalling.

“Even the risks from the nuclear reactors on board submarines is too high – as the spillage from the effluent barge shows.”