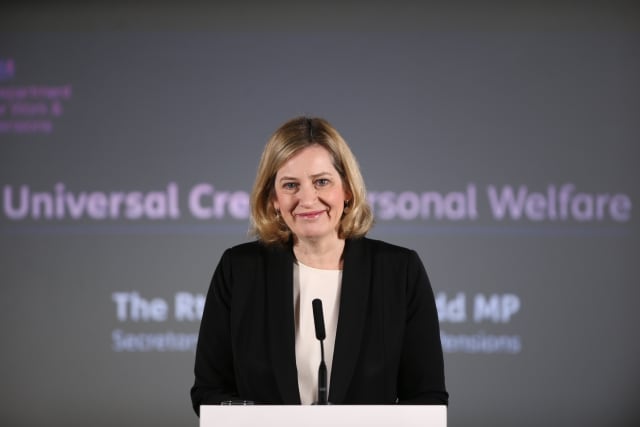 Amber Rudd has been urged to take further steps to help people on Universal Credit after unveiling reforms of a system she said was not as “effective” or “compassionate” as she wanted.

Charities, church and union leaders spoke out after the Work and Pensions Secretary said a plan to move three million people on to the single benefit payment would be delayed until 2020.

Ms Rudd also said a controversial plan to apply a two-child benefit cap retrospectively to new Universal Credit (UC) claimants would be axed in a move that will help around 15,000 families.

She said it was not “reasonable” to impose the two-child cap – intended to force claimants to make decisions on whether they can afford a third child in the same way as those in work – on families which already have more than two offspring.

Ms Rudd also signalled that an end is in sight for the longstanding benefit freeze introduced by former chancellor George Osborne in 2016, saying “it should come to an end” in 2020.

However, she admitted she had yet to discuss extra funding with Chancellor Philip Hammond.

Other changes will make the system more “individual”, tailoring it to claimants’ needs by making payments more regular or paying rent money direct to landlords.

She said: “We hope the Government is now waking up to the challenges faced by tens of thousands of households around the country who cannot wait until 2020 for the freeze to be lifted.

Save The Children’s Steven McIntosh said the announcements were “a step in the right direction”, but added: “Families are forced to pay sky-high childcare fees before waiting weeks to be paid back.

“This risks plunging families into debt or keeping parents out of work, undermining the whole system.

“The Secretary of State acknowledged this is a huge issue but the proposed solution – short-term support and flexibility over deadlines when parents start work – tinkers around the edges of a problem that needs addressing head on.”

Ms Rudd used her first major welfare speech to try to allay fears about the roll-out of UC.

The minister told an audience at a Jobcentre in Kennington, south London, that it was “not right” that the two-child limit was being made retrospective from February.

She added: “All children born before that date will continue to be supported by Universal Credit. And that will help approximately 15,000 families a year.”

Ms Rudd’s move came as the Commons Work and Pensions Committee branded the plans to retrospectively extend the cap to children born before it was brought in “cruel”.

The Work and Pensions Secretary had earlier told BBC Radio 4’s Today programme that she remained committed to the completion of the “migration” of claimants of six old benefits on to UC by 2023.

“I’m absolutely convinced that Universal Credit is a far better system than the legacy system it replaces,” she said.

“This is a really ambitious project. It’s going to impact on eight million people’s lives when it is finally completed.

“It is inevitable that, as we roll it out, as we make the changes, we are learning about how to do it better.

“Maybe things that were proposed previously weren’t effective or weren’t compassionate in the way that I want them to be.

“So I’m going to be perfectly bold about making those changes where I need to.”

Taking questions after her speech, Ms Rudd repeated her desire to see an end to the benefit freeze next year.

She told reporters: “I haven’t had any further conversations with the Chancellor so I had better not say anything too definitive at this stage.

“But it would certainly be my view that it should come to an end at that stage.”

But Unison general secretary Dave Prentis branded the remaining cap “morally wrong”, adding: “Now at least families who had a third child before April 2017 won’t be hit, but there are still many others with younger children who will be.

“This is a highly flawed system that needs to be thoroughly rethought.”