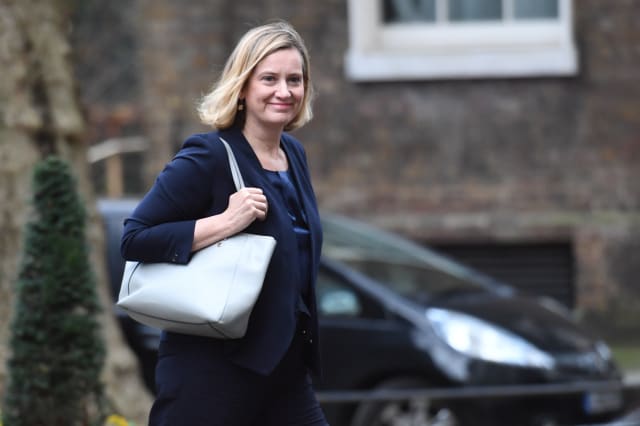 Amber Rudd has announced a set of reforms to the Government’s new Universal Credit, saying that the system she inherited was not as “effective” or “compassionate” as she wanted.

The Work and Pensions Secretary confirmed that she was delaying asking Parliament for permission to move three million people on to UC until next year, after a pilot of the transfer from existing benefits has been completed.

And she announced that controversial plans to apply a two-child benefit cap retrospectively to new Universal Credit (UC) claimants are to be scrapped, helping around 15,000 families.

Ms Rudd also signalled that an end is in sight to the longstanding benefit freeze introduced by former chancellor George Osborne in 2016, telling Sky News she did not expect it to be renewed in 2020.

She said it was not “reasonable” to impose the two-child cap – intended to force claimants to make decisions on whether they can afford a third child in the same way as those in work – on families which already have more than two offspring.

Other changes will make the system more “individual”, tailoring it to claimants’ needs by making payments more regular or paying rent money direct to landlords.

She said she also would build a “nudge” into the system to ensure that a couple’s UC payment was “much more likely” to go to children’s primary carer-giver – usually the woman.

Ms Rudd told BBC Radio 4’s Today programme that she remained committed to the completion of the “migration” of claimants of six old benefits onto UC by 2023.

“I’m absolutely convinced that Universal Credit is a far better system than the legacy system it replaces,” she said.

“This is a really ambitious project. It’s going to impact on 8 million people’s lives when it is finally completed.

“It is inevitable that, as we roll it out, as we make the changes, we are learning about how to do it better.

“Maybe things that were were proposed previously weren’t effective or weren’t compassionate in the way that I want them to be.

“So I’m going to be perfectly bold about making those changes where I need to.”

She added: “I’m not accepting that it wasn’t compassionate in the first place. It was. I’m just reinforcing that.”

Ms Rudd defended Mr Osborne’s benefit freeze, saying it had been right to introduce it in an age of austerity.

She told Sky: “The whole point about the three-year benefit freeze was making sure that people on low incomes had the same rises as people on benefits.

“This was a time when inflation was very low and it was the right thing to do at the time, given that we also had the massive debts that the country had inherited from Labour.

“It was the right policy at the time, it’s got one more year to run, I look forward to it coming off.”

Pressed on when this might be, she added: “It has one more year to run … I do not expect that to be renewed at all.”

Ms Rudd was using her first major welfare speech on Friday to try to allay fears about the roll-out of UC.

She will say: “As it stands, from February 2019 the two-child limit will be applied to families applying for Universal Credit who had their children before the cap was even announced. That is not right.

“These parents made decisions about the size of the family when the previous system was the only system in place.

“So, I can today announce that I am going to scrap the extension of the two-child limit on Universal Credit for children born before April 2017.

“All children born before that date will continue to be supported by Universal Credit. This will help approximately 15,000 families a year.”

Ms Rudd’s move came as the Commons Work and Pensions Committee branded the plans to retrospectively extend the cap to children born before it was brought in “cruel”.

Spelling out plans to slow down the “managed migration” to UC of claimants whose circumstances have not changed, Ms Rudd will say: “I am going to change the current regulations, removing the powers Government previously planned to seek to migrate all legacy claimants on to the new system.

“Instead I am only going to seek powers for a pilot: the chance to support 10,000 people through the process, giving us the opportunity to learn how to provide the best support, before coming back to Parliament to seek permission for future migration.

“This will begin, as planned, from July 2019 and the next six months will be a period of careful preparation.

“I will consider carefully the results of the pilot and its implications for scaling up migration.”

Shadow work and pensions secretary Margaret Greenwood said the move was a “partial U-turn” that did not go far enough.

She said: “Universal Credit simply is not working: it is pushing many families into poverty, rent arrears and towards food banks.

“The Government must stop the roll-out immediately before more people are pushed into financial hardship.”

But Gillian Guy, chief executive of Citizens Advice, said: “It’s encouraging to see the Secretary of State taking a fresh look at the welfare system.

“Universal Credit has to work in practice as well as in theory.”