Public should ‘report anything suspicious’ after heavy hippo sculpture is stolen 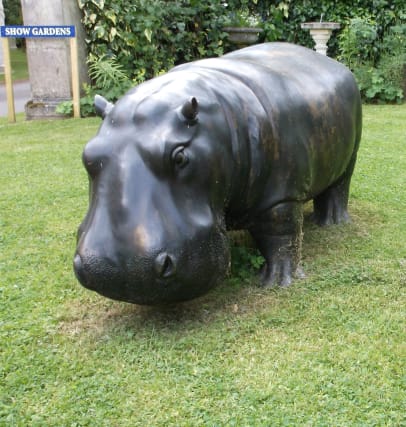 The public have been urged to “keep their eyes open” after a large metal hippopotamus weighing the best part of a tonne was stolen from a garden statue business.

The two metre-long cast bronze sculpture was taken from Chilstone, near Tunbridge Wells, some time between 5.30pm on Wednesday and 7am the following morning, Kent Police said.

The thieves, who broke into the business’s show gardens, would have needed a large vehicle and possibly a winch to steal the “hugely distinctive object”, PC Nick Lingham said.

The hippo is “extremely heavy” and has required the strength of five people to lift it previously, he added, urging people to “keep their eyes open and report anything suspicious”.

PC Lingham went on: “It is clear those responsible would have needed a large vehicle such as a flatbed truck and may have also needed to lift it by mechanical means.

“It is a hugely distinctive object and it is unlikely the offenders will find it that easy to sell on as scrap or to a collector.

“Because of its sheer size we are hoping people may have seen it being transported.”