A look at the charities behind Meghan’s patronages 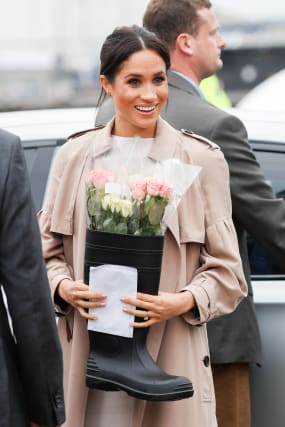 The Duchess of Sussex now has four patronages.

Here’s a look at the organisations Meghan has chosen to support.

A patronage of the famous National Theatre, previously held by the Queen, is a natural fit for former actress Meghan.

The Suits star is described by Kensington Palace as a “strong believer in using the arts to bring people from different backgrounds and communities together”.

While she shot to fame on screen, Meghan’s background is in theatre.

She studied a double major in theatre and international relations at Northwestern University, which is renowned for its drama programme, and also volunteered at a performing arts after-school programme for underprivileged children in Los Angeles.

The National Theatre, based on London’s Southbank, aims to make entertaining, challenging and inspiring world class theatre which is open to everyone, with a broad range of productions staged in London, on tour around the UK, on Broadway and across the globe.

Through its NT Live, the company broadcasts some of the best of British theatre to more than 2,500 cinemas and venues in 65 countries, and the free streaming service On Demand In Schools is used by nearly 60% of UK state secondaries.

The National Theatre Company, which has produced more than 800 plays, gave its first performance more than five decades ago when Peter O’Toole starred as Hamlet on October 22 1963, directed by Laurence Olivier.

Meghan held a private meeting with Rufus Norris, the NT’s artistic director, last month, widely seen as a sign she would be taking on the patronage.

– The Association of Commonwealth Universities (ACU)

Established in 1913, the ACU is the world’s first and oldest international university network, with more than 500 member institutions in over 50 countries.

Meghan has also taken this patronage over from the Queen.

It focuses on improving access to higher education and building global policy networks, and manages prestigious scholarship programmes to strengthen global student mobility – such as the Marshall Scholarships, Chevening Scholarships and the Queen Elizabeth Commonwealth Scholarships.

Meghan previously joined the ACU to announce two gender grants during an event at the University of the South Pacific.

She also attended the ACU’s discussion with academics at King’s College London in December on the role of higher education in addressing issues such as human trafficking, modern slavery, gender equality, peace and reconciliation, and climate change.

The ACU champions higher education as a force for good in the Commonwealth and beyond.

Smart Works is a UK charity that provides high-quality interview clothes and training to unemployed women in need.

It has a team of 300 trained volunteers and helps long-term unemployed and vulnerable women regain the skills, confidence and tools to succeed at job interviews, return to employment and transform their lives.

It was named as the Social Action Charity of the Year 2017 at the National Charity Awards.

Smart Works has helped more than 11,000 women and aims to dress 3,500 this year across their two London offices, and additional bases in Edinburgh, Manchester, Reading, Birmingham and Newcastle.

Half of Smart Works’ clients are from an ethnic minority, long-term unemployed and have been unsuccessful with a large number of job applications.

Some 60% go on to get a job following their visit to Smart Works.

The duchess has privately visited Smart Works several times over the last year and worked with some of the women who have benefited from the charity’s support, Kensington Palace revealed.

Meghan has had a long-standing commitment to supporting women’s empowerment, previously travelling to India and Rwanda to work on projects helping those in challenging situations to develop their full potential.

While at university, she was involved with a project to provide prom dresses to young women in underprivileged areas.

Mayhew is a London-based animal welfare charity working to improve the lives of dogs, cats and people in communities in London and internationally.

Set up in 1886, it looks for innovative ways to reduce the number of animals in need through proactive community and educational initiatives and preventative veterinary care.

It works with homelessness charities across London to ensure people and their dogs can be kept together, and runs a Pet Refuge programme to provide shelter and care for the pets of people in crisis for short periods of time.

It also educates young people about animal welfare and the importance of responsible pet ownership, and rehomes cats and dogs.

While Guy came to the UK with Meghan when she moved from Toronto to live with the Duke of Sussex, Bogart was too old to travel and had to stay behind with friends.

Harry and Meghan, who are expecting their first child in the spring, also have another dog – a Labrador.