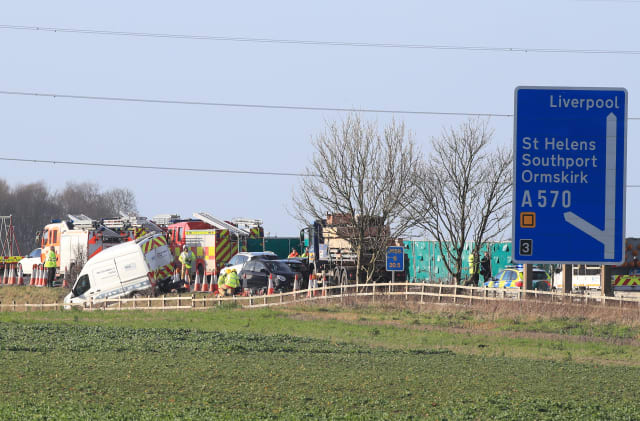 The family of a mother-of-two killed in a multi-vehicle motorway crash have said they are “heartbroken”.

Anne Kerr, 50, from Southport, and a 14-year-old boy died in the collision close to the junction of the M58 westbound at Bickerstaffe, Lancashire, on Tuesday.

They were travelling in a minibus which was involved in a collision with an HGV and a number of other vehicles at about 9am.

The driver of the HGV, a 31-year-old-man from Chorley, was arrested on suspicion of causing death by dangerous driving. He has since been released under investigation pending further inquiries.

In a tribute to Mrs Kerr, her family said: “Anne was much loved by all who knew her. She will be deeply missed by all her friends and family.

“She was a daughter, wife, and mum to two lovely boys. She was a lovely personality to be around. Her death has left us all heartbroken.”

Mrs Kerr was a staff member at a special educational needs school in Ormskirk, Lancashire, reported the Liverpool Echo.

The teenager who died in the collision was also a pupil at Pontville School, the newspaper added.

A number of other people suffered serious injuries in the incident and continue to be treated at hospital, said Lancashire Police.

A second collision took place at around 10:10am in the queuing traffic involving an HGV, a van and two cars.

A woman and two men suffered serious injuries in that collision. They remain in Aintree Hospital receiving treatment.

Sergeant Steve Wignall, of Lancashire Police, said: “Our thoughts remain with the families of everyone affected by the tragic incidents yesterday. We have specially trained officers supporting them at this very sad and difficult time.

“We need anyone who saw either of the collisions but hasn’t spoken with us already to come forward. You may have vital information to assist our investigation.”

Anyone with information can call 101 quoting log number 275 of Tuesday January 8th.