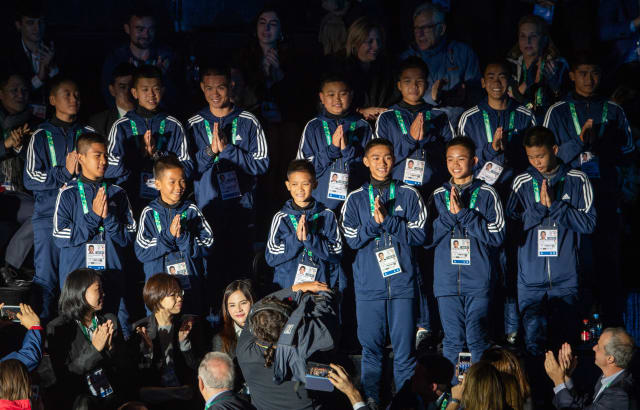 A cave diver who was part of the team that rescued 12 soccer players and their coach in Thailand says the emotional toll of the rescue still affected him six months later.

Jim Warny, originally from Belgium, has lived in Ennis, Co. Clare, in Ireland’s south west for 15 years, and says he first found out about the rescue from media reports on a social network.

The world watched on in July last year as a diving crew were tasked with guiding the Wild Boars football team from the flooded Tham Luang Cave in Chang Rai after being trapped inside while on a walk.

“Like everyone else I was just getting snippets from media, but you can never be completely sure what is happening,” Mr Warny said on Wednesday in Dublin at the Pendulum Self-Empowerment Summit.

“I knew some of the rescue team and had text them to say that I’d be there if they needed me, and I got a text back immediately saying; ‘How quickly can you get here?'”

A member of the Irish Cave Rescue Organisation, Mr Warny has experience at locations around the world, dating back two decades.

He says the stress of the situation, as well as the risks to the young players, took an emotional toll  after the subsequent “media circus” had died down.

“You have to try and compartmentalise, and it’s not always the easiest thing and sometimes in the long run emotions do catch up with you anyway.

“They did, definitely with me, with Thailand it took about six months really.

“Thailand was not my usual expedition so it was inevitable that emotions would come back.

“You become very quiet, and there’s a bit of crying. I’m not afraid to say I cried for 15 minutes, I didn’t really understand where it came from.

“The trigger for me was watching a pre-recorded documentary that I had done.

“It just happened out of the blue, that place where I parked all those emotions when I saw those kids coming out, dragging one of them along, bottled up for six months, they came out eventually but at least I was sitting down and it wasn’t in the cave.”

A Thai Navy Seal died in the operation in which all 12 of the boys and their coach were rescued safely.

Mr Warny said the group were using procedures that had never been tested before, due to the extraordinary circumstances, including sedating the boys in order to take them from the cave safely.

Noting his son was around the same age as the boys, Mr Warny said he felt worried about the public opinion around drugging the children.

“When it comes to risks you have to calculate them, but not be overcome by them.