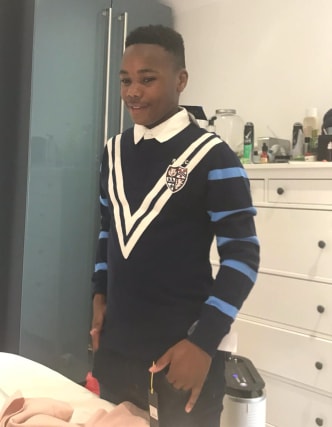 The car police believe was used by three men who rammed and then repeatedly stabbed a 14-year-old boy has been found.

Jayden Moodie was murdered on Tuesday in an area of east London notorious for drug dealing and blighted by so-called county lines gangs that are known to exploit children.

Police said they believe the attack was “targeted and intent on lethal force from the outset”.

Chief Superintendent Richard Tucker told reporters he could not sleep for thinking about what had happened to such a young boy.

He said of the boy’s age: “I think that will strike a chord with so many people and so many parents across the UK.”

The teenager, who lived in the area with his mother, was knocked off the moped by a black Mercedes B Class at around 6.30pm on Tuesday in Bickley Road, Leyton, and then stabbed several times by three attackers as he lay unconscious in the road.

The car was found on Wednesday in nearby Carlisle Road area of Leyton, a few hundred metres away, and remains there for forensic examination.

Detective Chief Inspector Chris Soole from the Homicide and Major Crime Command, who is leading the investigation, said:  “We are treating the recovery of the car as a significant development in our enquiries, which are still very much in their early stages.

“Jayden’s family are being fully supported and kept updated by our team. This is a truly heartbreaking time for them and we are doing everything we can to find out who was responsible for Jayden’s death.”

Mr Tucker said it was too early to ascertain a motive or say whether an incident a few streets away from the crime scene on Wednesday when a man was slashed across the face was linked.

“It’s shocking, it’s an appalling event and this will have affected huge numbers of our young people and we’ve got additional officers in the area, and at schools, to actually reassure people that they are safe in east London.

“Whatever the reasons for his death, he was 14 years old and I would urge anyone who has any information to come forward and assist us to catch the people who did this horrific, horrific offence.”

A section 60 order was put in place to allow officers to search anyone in the vicinity of the scene for weapons.

Jayden’s godmother Zoe Grant, who lives in Nottingham, paid tribute to the 14-year-old by saying: “He was full of life, fun loving and a ray of sunshine. He was a beautiful boy, so intelligent, had everything to live for.

“He went to London and then this happens – it’s just so unfair.

“He was very dearly loved by everybody.

A family friend, who gave his name as Solomon, said the schoolboy, a talented boxer, was a “wonderful” and “loving” child.

Describing himself as Jayden’s “acting grandfather”, he said the system was “really letting down the youth”.

“They don’t come on the streets because they want to – they don’t have a choice,” he said.

“They need to be given a chance to breathe like everyone else in the world.”

In 2018, around a fifth (17%) of homicide victims in London were teenagers, most of whom were stabbed. The youngest were aged 15.

The borough where Jayden died, Waltham Forest, has has been blighted by gang crime, with the local authority ploughing £3 million over the next four years into a prevention programme.

Police patrols were stepped up in the wake of the murder.