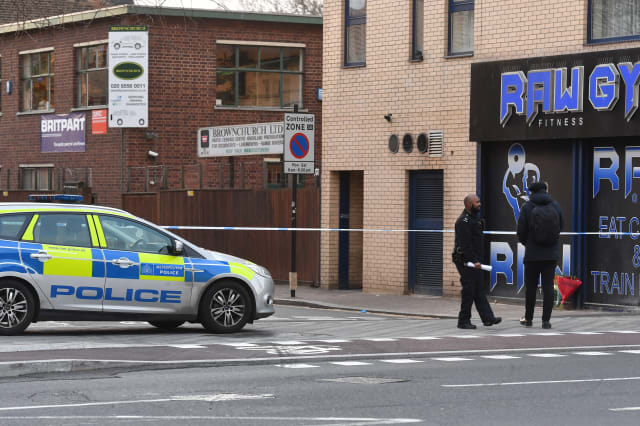 A 14-year-old boy was stabbed to death after being knocked off a moped in an area locals said was notorious for drug dealing.

Police were called to reports of a road accident in Bickley Road, Leyton, in the London Borough of Waltham Forest, at 6.30pm on Tuesday.

The Metropolitan Police said the teenager was found with stab wounds, and detectives have established that he was riding a moped which had been involved in a collision with a car.

Several bouquets were laid on the pavement near the crime scene, which remained cordoned off on Wednesday.

Locals said there were moped gangs of young people in the area and that drug dealing regularly took place.

They also said there were several CCTV cameras covering the main roads surrounding the crime scene.

Ali Yamah, a tyre fitter who has worked opposite Bickley Road for 17 years, said the area could be intimidating at night.

The 48-year-old said: “In my experience here there is drug dealing, this is the main source.

“In the evening, now it’s winter time, they put on masks.”

He added: “Sometimes we are afraid, people are afraid of this kind of behaviour.”

Police said all lines of inquiry into the 14-year-old’s death remain open, and have not said whether they believe the murder was gang-related.

A Met spokesman said: “It is believed that three males got out of the car and then stabbed the victim before returning to the vehicle and driving off.

“Despite efforts of paramedics, he was declared dead at 7.09pm. Next of kin have been informed.”

It is understood the moped has been removed from the crime scene.

Two police vehicles were parked in the middle of the cordoned-off area on Wednesday morning but a forensics tent that was erected on Tuesday evening had been taken down.

One man, who did not want to be named, described how a witness to the incident came into the premises where he works nearby, clearly horrified by what they had seen.

He said the witness told him that the teenager who was on the moped was struck by the car, which was travelling in the opposite direction.

“They said they knocked him off the moped and four people got out of the car and they stabbed him seven times – there were unsurvivable wounds in his back,” he said.

He added that the witness said the boy was possibly unconscious when he was stabbed, with his helmet thrown up to 10 metres away.

The man said: “He thought it was an accident, that somebody had knocked someone, but then he said they quickly came (out of the car).

“They beat him up, and they stabbed him, and they left.”

Residents who live in Bickley Road said they did not hear any shouting or screaming.

They said it was not until they saw the blue flashing lights from the emergency services that they knew something had happened.

In 2018, around a fifth (17%) of homicide victims in London were teenagers, most of whom were stabbed. The youngest were 15.

The borough of Waltham Forest, in north-east London, has been blighted by gang crime, with the local authority ploughing £3 million over the next four years into a prevention programme.

It commissioned a report, published in the summer of 2018, which found that so-called county lines drug gangs were operating in the area, fighting more over money than geographical territory.

These gangs are known for forcing children and vulnerable people to get involved in crime.