Airports say they are cracking down on drones after Heathrow incident 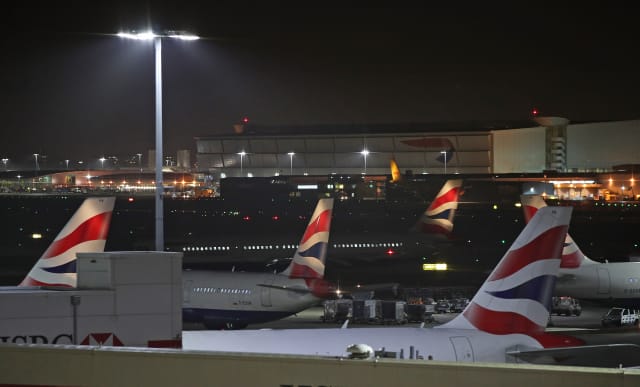 Airports say they are stepping up measures to stop drones grounding flights after the latest incident at Heathrow.

Departures at the west London hub were suspended for around an hour on Tuesday night after a drone was spotted.

This came three weeks after drone sightings caused chaos at Gatwick in the run-up to Christmas, affecting the travel plans of 140,000 passengers as the runway was closed.

Aviation minister Baroness Sugg and security minister Ben Wallace will hold a meeting with airport bosses on Thursday to discuss plans to crack down on the problem.

The Department for Transport said the Government is working with the aviation industry to explore technical solutions.

A spokesman for the Airport Operators Association, a trade association representing UK airports, said: “In light of events at Gatwick and Heathrow, airports are working together, as well as with Government and the police, to see what lessons can be learnt.

“This includes looking at what technology is available and what deterrent action, such as increased police patrols, can be taken.”

The group is reviewing whether it wants the Government to introduce legislation which would make it mandatory for drones to be fitted with geo-fencing technology to stop them entering no-fly zones, such as airports.

Heathrow would not be drawn on what action it is taking to stop drone incursions, but the airport recently said it is investing millions of pounds in equipment to prevent future flight disruption.

The police and Government were criticised during the Gatwick incident by some passengers who felt they were too slow to ground the drones or apprehend their operators.

Devices which detect, track and ground drones have been installed at the West Sussex airport.

The Anti-Unmanned Aerial Vehicles Defence System was developed by three UK-based firms and has been pictured in use on the roof of Gatwick’s South Terminal.

Drone flying instructor Mitchell Apple warned that a lack of “personal responsibility” is a factor in drone misuse.

Speaking from the show floor of the CES technology show in Las Vegas, he said the devices are “just another tool” which can be used “however a person wants to”.

The military was brought in on Tuesday night to assist with the anti-drone operation at Heathrow.

Commander Stuart Cundy, of the Metropolitan Police, said “significant resources” had been deployed to monitor the airspace and “quickly detect and disrupt any illegal drone activity”.

A spokesman for the Ministry of Defence said: “We are deploying specialist equipment to Heathrow Airport at the request of the Metropolitan Police.”

A Heathrow spokeswoman said the airport would “continue to work closely with the Metropolitan Police on their ongoing investigations”.

Following the end of the initial drone-related disturbance at Gatwick, Mr Wallace said: “I can say that we are able to now deploy detection systems throughout the UK to combat this threat.”

On Tuesday, the Government announced a package of measures designed to give police extra powers to combat drones.

The exclusion zone around airports will be extended to approximately a 5km-radius (3.1 miles), with additional extensions from runway ends.

Ministers also announced that from November 30, operators of drones weighing between 250g and 20kg will be required to register and take an online drone pilot competency test.

Police will also be able to issue fixed-penalty notices for minor drone offences to ensure immediate and effective enforcement of the new rules.

Fines of up to £100 could be given for offences such as failing to comply with a police officer when instructed to land a drone, or not showing their registration to operate a drone.