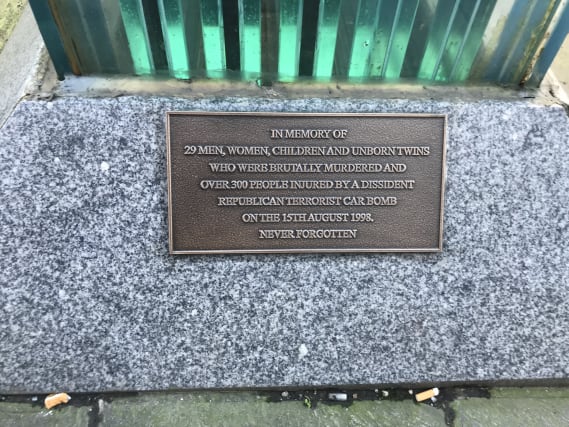 A new plaque which was added to an Omagh bomb memorial without the approval of the local council is set to be discussed at a meeting.

Kevin Skelton, whose wife Philomena was one of the 29 people and unborn twins killed in the 1998 blast, was responsible for the addition.

He afixed the bronze plaque to the bottom section of the glass memorial which stands at the site of the bomb on the town’s Market Street.

It reads: “In memory of 29 men, women, children and unborn twins who were brutally murdered and over 300 people injured by a dissident republican terrorist car bomb on the 15th August 1998, never forgotten.”

Fermanagh and Omagh District Council said the placing of the plaque was not authorised. The matter is set to be discussed at a meeting of the council on Tuesday evening.

The placing of the plaque follows a dispute between the then Omagh District Council and the families of those killed in the blast over the wording on the monument, which was erected ahead of the 10th anniversary of the atrocity in 2008.

A memorial garden close to the site was also created at that stage.

Some councillors objected to the words “dissident republican” being included on the monument or in the garden.

An independent mediator was appointed to help the council and families reach agreement, but some of the families were left discontented when the monument was created.

It consists of a glass monument which includes a heart.

A nearby plaque on a wall simply refers to an “act of terror”.

Mr Skelton said he wants future generations to know exactly what the memorial is for.

He glued the plaque, which cost around £300, to the monument on December 27 in “broad daylight”, and said he has not had any negative feedback about it.

“The reason I put the plaque on it was to let the world know what happened here,” he said.

“This is the bomb site, but there is nothing here to tell you what happened – except a plaque on the wall which just says terror attack. This is telling the truth, who carried it out, nothing only the truth.

“It’s not meant to offend anyone, I don’t think it is offending anyone, it is just telling the truth and it should have been on years ago.

“It’s no good putting up a memorial if you don’t say what happened, and that’s why I did it.”

Mr Skelton also said he regards the plaque as his final act when it comes to the bomb – following the last service to take place at the site last summer, which marked the 20th anniversary.

Now he said he wants to focus on helping people through his organisation Families Moving On.