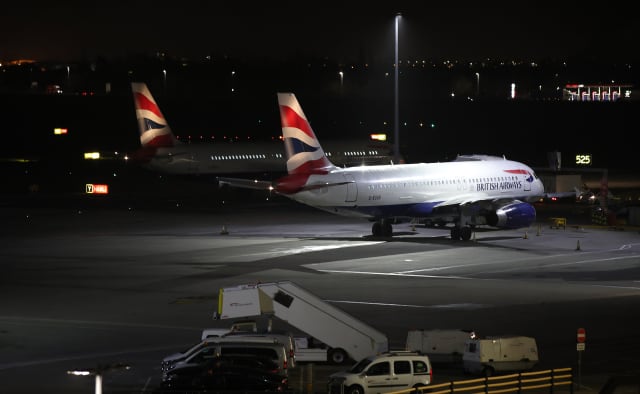 The military was brought in after police officers saw a drone at Heathrow Airport, forcing departures to be suspended for an hour.

The Metropolitan Police said it was deploying significant resources after the incident at 5pm on Tuesday, which came three weeks after drone sightings caused chaos at Gatwick Airport.

Heathrow apologised for any disruption caused to passengers after flights were suspended.

Commander Stuart Cundy of the Met said: “Police officers were amongst those who saw the drone and a full criminal investigation has been launched.

“We are carrying out extensive searches around the Heathrow area to identify any people who may be responsible for the operation of the drone,” he said.

“I want to be clear that the illegal operation of drones at an airfield is extremely dangerous.

“Under the Aviation Security Act it is an offence to endanger the safety of an aircraft, anyone found guilty of this offence could face a life sentence.

“We are deploying significant resources – both in terms of officers and equipment – to monitor the airspace around Heathrow and to quickly detect and disrupt any illegal drone activity; some of which are as a result of learning from the incidents at Gatwick.

“Following today’s sighting, military assistance has been implemented to support us. However, we will not be discussing in any further detail the range of tactics available to us as this would only serve to potentially undermine their effectiveness.”

He said if people saw anyone acting suspiciously, including operating a drone or model aircraft in the area around Heathrow or other airports, they should dial 999.

A spokesman for the Ministry of Defence said: “We are deploying specialist equipment to Heathrow Airport at the request of the Metropolitan Police.”

Transport minister Chris Grayling said during the incident: “We are in contact with @HeathrowAirport concerning the drone sighting.

“I have already spoken to both the Home Secretary and Defence Secretary and the military are preparing to deploy the equipment used at Gatwick at Heathrow quickly should it prove necessary.”

A Heathrow spokesman said: “We continue to work closely with the Met Police to respond to reports of drones at Heathrow.

“Based on standard operating procedures, working with Air Traffic Control and the Met Police, we have resumed departures out of Heathrow following a short suspension.

“We continue to monitor this situation and apologise to any passengers that were affected by this disruption.”

The drone sighting came four days after both Heathrow and Gatwick airports reported they were investing millions of pounds in equipment to prevent future flight disruption.

Between December 19 and 21, Gatwick was repeatedly forced to close due to reported drone sightings, causing mass disruption to passengers, with about 1,000 flights affected.

The Army was brought in to help deal with the travel chaos and was not stood down until after Christmas.

The anti-drone equipment can detect and jam communications between a drone and its operator and was deployed on a roof at Gatwick.

The system, which is said to have a range of several miles, uses four radars to give 360-degree detection in order to identify and track targets.

Following the end of the initial drone-related disturbance at Gatwick, security minister Ben Wallace said: “I can say that we are able to now deploy detection systems throughout the UK to combat this threat.”

On Tuesday, the Government announced a package of measures designed to give police extra powers to combat drones.

The exclusion zone around airports will be extended to approximately a 5km-radius (3.1 miles), with additional extensions from runway ends.

Ministers also announced that from November 30, operators of drones weighing between 250g and 20kg will be required to register and take an online drone pilot competency test.

Police will also be able to issue fixed-penalty notices for minor drone offences to ensure immediate and effective enforcement of the new rules.

Fines of up to £100 could be given for offences such as failing to comply with a police officer when instructed to land a drone, or not showing their registration to operate a drone.