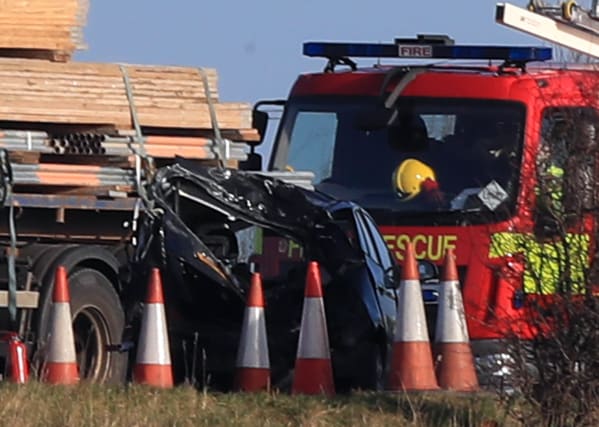 Four people have been taken to hospital after a “very serious accident” on a motorway, emergency services said.

Two air ambulances, four land ambulances, police and fire engines are all in attendance following the crash between junctions 3 and 4 of the M58 near Wigan just after 8.45am on Tuesday, the North West Ambulance Service said.

Highways England has said both lanes will be closed for several hours between Bickerstaffe and Orrell to deal with the incident, which included a second serious collision.

An NWAS spokeswoman told the Press Association that three of those taken to hospital are male, two of whom may be children.

“One is in his early 60s and has major trauma injuries, the other two are in their mid-teens,” she said, although she was not aware if they were travelling together.

Images from the scene showed a lorry carrying scaffolding material and a number of bent and twisted cars.

Other images showed a white van had left the motorway and crashed into a nearby field.

A spokesman for Allied Scaffolding said: “We are fully aware of the situation and it is related to our company.

“We are in full co-operation with the police and authorities and will give them our full support.

“Our main concern at this stage is for those involved in the crash.”

Helen Green Purnell, 48, a pharmacy assistant from Skelmersdale, saw the aftermath of the crash while out walking dogs.

She said: “All I can tell you is I saw the cars slowing down and as I got there and there was a white van that had fallen down in to the ditch.

“It looked very serious. I’ve never seen anything like it in my life.

“The air ambulances were flying around. I’ve never witnessed anything like this before.”