Transport Secretary needs to step down for action on railways, union claims 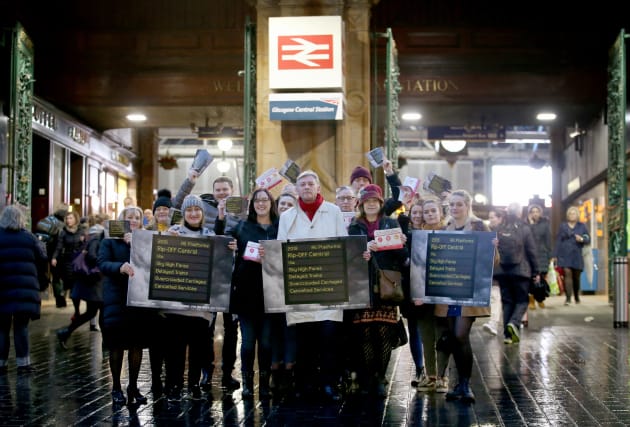 Scotland’s Transport Secretary will have to leave his post to ensure Abellio is stripped of the ScotRail contract and the railways brought into public ownership, a rail union has claimed.

The TSSA union organised a protest outside Glasgow Central Station calling for action after a rise in rail fares following months of delays and cancellations to trains.

Scottish Labour leader Richard Leonard attended the protest and backs union calls for the railway franchise to be removed from Dutch operator Abellio and returned to public ownership.

Liz Warren-Corney of the TSSA said Transport Secretary Michael Matheson would have to leave his post for this to happen as she believes he is “ideologically in favour of privatisation” unlike her view of his predecessor Humza Yousaf.

Questioned if Mr Matheson would have to go to achieve change, she said: “Yes. I don’t think that would be a bad thing.

“The job of Transport Secretary is to stand up for passengers and when it comes to ScotRail, he has done anything but.”

She added: “I think politicians need to bow to the will of the public and ultimately if they see this is what the public want then, yes, they will go that way.

“We certainly saw Humza Yousaf was very much open to the idea of bringing ScotRail into public ownership.

“Unfortunately, he’s gone and Matheson has now bottled it, frankly, and clearly will do anything he can to prop up Abellio’s failing operation of ScotRail.

“It’s quite ridiculous when you think a few months ago he actually waived the requirement for Abellio to adhere to their franchise agreement and all that Abellio have done since then is actually deliver steadily worse services.”

She claimed public ownership of the railways would lead to a 6% cut in fares and improved investment in staff and services due to removal of the “profiteering element” of privatisation.

Mr Leonard urged the Scottish Government to use the break clause in the ScotRail franchise to take the railway into public ownership.

“We’ve seen in the last week fares going up so many of the commuters coming into Glasgow this morning are paying extra for a service which is worse and we think there is huge support for a return of ScotRail into public ownership,” he said.

“It would mean that every single penny that passengers pay would be reinvested in the railway instead of the current situation where part of that goes back to pay shareholder dividends in Holland.”

He added since the publicly-run Network Rail is run as part of the ScotRail Alliance there is a “strong case” for the entire rail network in Scotland to become a publicly-owned and run integrated service.

A Scottish Government spokesman called on the UK Government to devolve all rail matters.

He said: “Anyone with a genuine interest in improving our railways should get behind this.