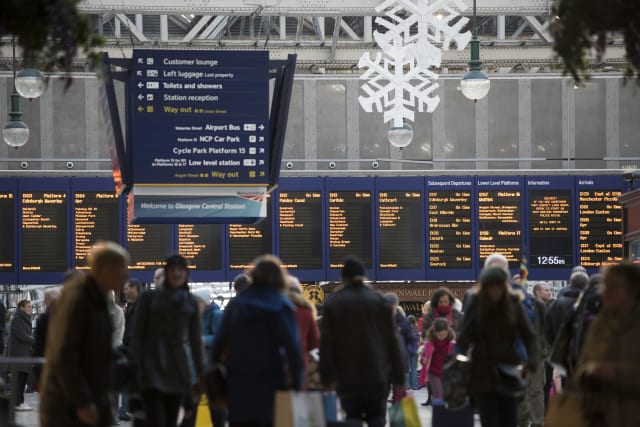 ScotRail has announced that extra compensation will be offered to season ticket holders as it apologised for falling performance levels.

The rail operator has been criticised over a number of cancellations across the country following the introduction of a new timetable in December.

Conductors and drivers being trained on new trains and routes has been blamed as a major reason for the disruption, with training expected to continue into February.

Compensation is already available to passengers who are delayed by more than 30 minutes under ScotRail’s Delay Repay Guarantee – with 50% of the cost of a single ticket or 25% of the cost of a return ticket paid back.

However, extra compensation will apply to season ticket holders who use routes that have been most affected by cancellations.

Alex Hynes, ScotRail Alliance managing director, admitted that the operator has fallen below the standards expected by customers.

“We are very sorry to our ScotRail customers for unacceptable service in parts of the country recently,” said Mr Hynes.

“While our teams work hard every day to deliver the service you demand, the reality is we’ve fallen below the standard you expect and deserve.”

Mr Hynes indicated that limited time has been available to provide training due to the late delivery of trains by suppliers, including Hitachi and Wabtec.

The ScotRail boss also said that an overtime and rest day working ban, now resolved, by the RMT trade union made the training problems worse.

Mr Hynes said “We have seen the level of cancellations reduce steadily over the last few weeks.

“We will continue to cut cancellations to improve your service.  We expect week-on-week improvement through January and February to get your service back to normal levels.

“We know you deserve better. The entire ScotRail Alliance – a partnership between ScotRail and Network Rail Scotland – is focused on delivering that and we will give you a better service.”

Protestors gathered outside Glasgow Central Station on Monday morning to call for action to be taken against the rail operator.

Scottish Labour leader Richard Leonard attended the protest and backed calls from unions for the railway franchise to be removed from Dutch operator Abellio and returned to public ownership.

Mr Leonard urged the Scottish Government to use the break clause in the ScotRail franchise to take the railway into public ownership.

“We’ve seen in the last weeks fares going up, so many of the commuters coming into Glasgow this morning are paying extra for a service which is worse and we think there is huge support for a return of ScotRail into public ownership,” he said.

“It would mean that every single penny that passengers pay would be reinvested in the railway instead of the current situation where part of that goes back to pay shareholder dividends in Holland.”

He added that since publicly-run Network Rail is operated as part of the ScotRail Alliance there was a “strong case” for the entire rail network in Scotland to become a publicly-owned and run integrated service.

Liz Warren-Corney of the TSSA said that Transport Secretary Michael Matheson would have to leave his post for this to happen as she believes he is “ideologically in favour of privatisation” unlike her view of his predecessor Humza Yousaf.

Questioned if Mr Matheson would have to go to achieve change, she said: “Yes. I don’t think that would be a bad thing.

“The job of Transport Secretary is to stand up for passengers and when it comes to ScotRail, he has done anything but.”

She added: “I think politicians need to bow to the will of the public and ultimately if they see this is what the public want then, yes, they will go that way.

“We certainly saw that Humza Yousaf was very much open to the idea of bringing ScotRail into public ownership.

“Unfortunately, he’s gone and Matheson has now bottled it, frankly, and clearly will do anything he can to prop up Abellio’s failing operation of ScotRail.”

“Until this changes, we cannot consider the full range of options for running the railways in Scotland in a way which best suits our passengers, freight providers and communities.

“That is why we are yet again calling on the UK Government, through its rail review, to devolve all rail matters to the Scottish Ministers. Anyone with a genuine interest in improving our railways should get behind this.

An Abellio spokesman said: “Abellio’s focus is on delivering the existing franchise to the highest possible standards, working hard to put in place a railway that better connects passengers, businesses, and communities across Scotland.”