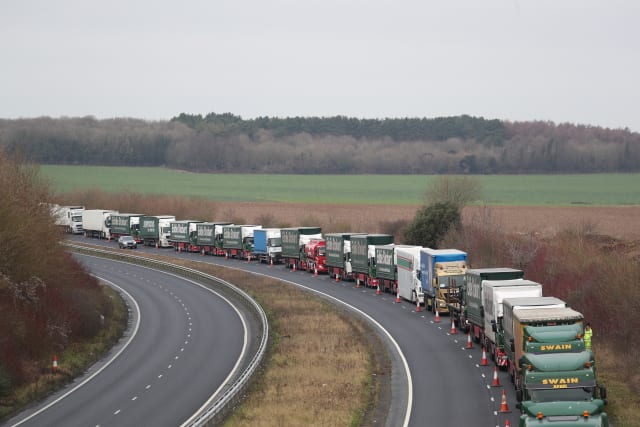 The Government’s no-deal Brexit lorry test was branded a pointless farce by critics after fewer than 100 lorries turned up – but officials insisted it was worthwhile.

Department for Transport (DfT) and Kent County Council defended the practice run of Operation Brock, which saw lorries descend on Manston Airport near Ramsgate and travel to Dover on Monday morning.

The Government plans to use the airfield as a giant HGV holding bay to prevent traffic jams around Channel ports if there is UK border disruption in the event of a no-deal Brexit.

Authorities hoped up to 150 trucks would be involved, according to letters which emerged last week, but 89 arrived on the morning at the disused airfield which has a capacity of just under 4,000.

Some 10,000 lorries may be held on Kent roads on a routine basis if there is no deal, the council previously warned.

The exercise was “too little too late” and could not “possibly duplicate” the anticipated reality, according to the Road Haulage Association’s chief executive Richard Burnett.

He said the test may need to be repeated, adding: “This process should have started nine months ago. At this late stage it looks like window dressing.”

The criticism comes just days after questions were raised over a £13.8million no-deal Brexit contract awarded by DfT to a ferry company which has not yet run services and faced accusations it copied part of its terms and conditions from a takeaway firm.

Adam Carter, a driver for INT Logistics, branded the lorry test “a waste of time” because the traffic was “average”, according to The Guardian.

But the owner of the Folkestone-based company Tracey Ives told Press Association the test ran “smoothly” and was “well-organised”, adding: “The roads were very quiet today.”

She suggested motorists may have avoided the area after the test was publicised.

Liberal Democrat MP Layla Moran, of the anti-Brexit Best For Britain campaign, said it was a “taxpayer-funded farce” while Shadow Transport Secretary Andy McDonald said it was “beyond parody”.

Fellow Labour MP David Lammy said there was “no better representation of the sheer absurdity of Brexit”.

Conservative Dover MP Charlie Elphicke said the plan was “not the answer” as it was “too complex”, likely to cause “enormous confusion” and should be a last resort.

Gary Moore, who lives in the town, said truck traffic has been known to bring its whole road system to a “standstill”, adding: “There has to be a plan that works.”

The trial was not about numbers and the amount which took part was sufficient, a DfT spokesman said.

The council’s highway manager Toby Howe said carrying out the DfT-led trial earlier “wouldn’t have really made any difference”, adding: “We’ve still got a couple of months to make any changes we need to make in time.”

He said it would not have been possible to use the large numbers predicted for a test and the exercise had been “really useful” to see how lorries could “get out en masse from the airport” and how this would affect the roads as well as travel time.

Ideas for the practice run were proposed a few months ago amid growing fears among civil servants that a no-deal Brexit was becoming a “very real threat”, Press Association understands.

But the authorities have been under discussion about using the site over the last two years, DfT confirmed.

Ben Pearce, another driver involved, said it seemed to go well, adding: “It will give them a fair idea how the traffic will behave if they do use the space as a holding bay.”

Regional and national hauliers were offered £550 per truck to take part, meaning £48,950 was paid out by DfT.

Shortly after 8am, and again at 11am, the queue of lorries left the former Kent International Airport – which closed in 2014 – and travelled the 20-mile route along the A256 to the Eastern Docks roundabout in Dover before returning.

The journey normally takes half-an-hour depending on traffic.

In the first test, four convoys left at intervals before a single stream of lorries drove away during the second test so officials could try out different scenarios, a DfT spokesman said.

The first batch of lorries to leave took about 35 minutes to complete the trip. Traffic was light on the route and the lorries did not seem to cause an extra congestion.

A DfT spokesman said: “We do not want or expect a no deal scenario and continue to work hard to deliver a deal with the EU. “However, it is the duty of a responsible Government to continue to prepare for all eventualities and contingencies, including a possible no deal.

“Any lessons learned from today and further mitigation measures will be considered carefully to ensure Operation Brock is fully functional if needed.”

The plan, if enacted, would be used alongside tried and tested measures of queuing up to 3,500 lorries along the M20 and even on the M26.