Protesters to demand Abellio be stripped of ScotRail contract 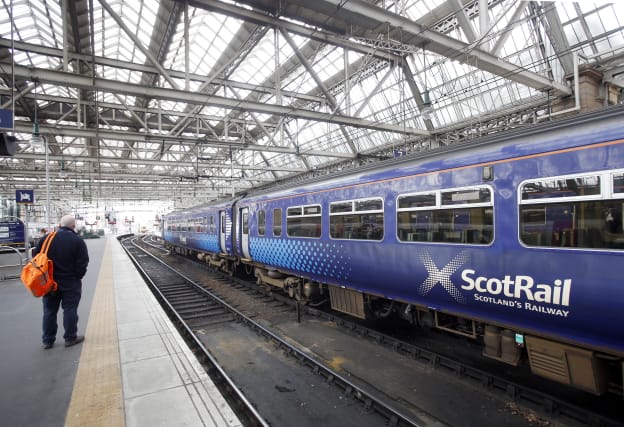 Protesters will gather at Glasgow Central station to demand Abellio is stripped of the ScotRail contract and to call for the franchise to be brought into public ownership.

The demonstration, organised by the TSSA rail union, is urging the Scottish Government to take action after months of delays and cancellations to trains in Scotland.

TSSA volunteers and other campaigners will be at Glasgow Central on Monday morning and union leader leader Manuel Cortes said: “Passengers are rightly angry at the way ScotRail has let them down – 2019 started with yet more late and cancelled trains and overcrowding is at an all-time high.

“Blame belongs with Abellio and their team of senior managers. Poor planning, deliberate understaffing of the railway and trying to do things on the cheap are not the fault of our members who do their best in tough circumstances.

“But ScotRail also fails because of the systemic problems visited on it by the now beyond-broken experiment with privatisation of our rail companies and rolling stock.”

In December ScotRail were instructed by the Scottish Government to submit a plan for how it will address falling performance levels.

However, the decision was criticised by Mr Cortes who blasted Transport Secretary Michael Matheson who he claims “has reneged on his predecessor Humza Yousaf’s willingness to break the Abellio franchise this March.”

He added:”When there could have been light at the end of the tunnel after months of misery, Matheson has done no more than ask Abellio for yet another plan which will take two months to arrive before anything gets done. Scottish passengers deserve better than that.

“Under public ownership not only could ticket prices come down but investment in rolling stock and staff would go up. A publicly owned ScotRail would reinvest the profits back into running the railway.”

A Scottish Government spokesman said: “Rail remains a reserved matter under the Scotland Act. Until this changes, we cannot consider the full range of options for running the railways in Scotland in a way which best suits our passengers, freight providers and communities.

“That is why we are yet again calling on the UK Government, through its rail review, to devolve all rail matters to the Scottish ministers. Anyone with a genuine interest in improving our railways should get behind this.

Scottish Labour said they would have campaigners joining union members at the demonstration in Glasgow.

“The SNP claimed this was a world-leading deal, but it’s clear that more and more people are being persuaded by Labour’s plans for public ownership.

“That’s why all across Scotland today our activists will be out at local train stations with a clear and simple message – Labour will take our railways back into public hands.”