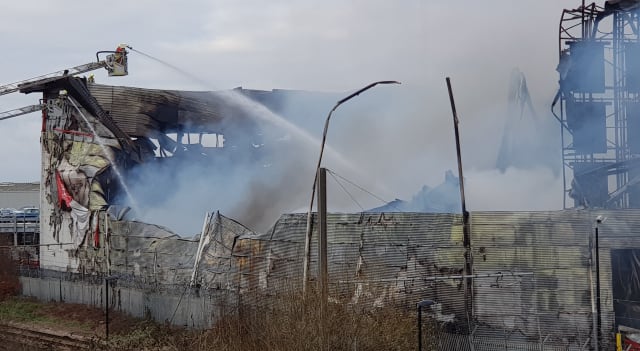 Hundreds of customers at a storage warehouse in south London are likely to have lost their belongings after a fire ripped through the building.

Shurgard, which runs the self-storage facility on Purley Way in Croydon, said it would contact all customers in the next two days following the blaze on Monday night.

The fire took hold at around 7.45pm, with up to 120 firefighters working to extinguish the blaze. The cause has yet to be confirmed.

Nobody was injured, police said, although the four-storey building has been extensively damaged.

A company spokesman said: “The entire building has been destroyed. Damage to the surrounding area seems to be limited, but for safety reasons traffic has been blocked for the time being.

“Shurgard representatives at the scene are working in close collaboration with the London Fire Brigade and the local police department to provide them with all necessary information on the store.

“The care for its customers of the 1,198 rented units at the Croydon Purley Way store is the first priority for Shurgard. Shurgard will undertake every effort to support all customers for which the event means a loss of their stored goods.

“As a first measure, a dedicated Shurgard team will be contacting every customer of the store within the next 48 hours to help them and support them with their claim procedures.”

He said: “As you can imagine, self-storage units are generally full of items like furniture which when packed tightly provide a lot of materials to burn, and so these sorts of incidents tend to create large fires that burn hard for a long time, creating a lot of smoke.

“That said, firefighters have worked hard to ensure that while the fire is burning, it is contained and won’t spread to nearby buildings. Currently, a thick plume of smoke is rising from the fire and while most of it is dissipating in the air, it is visible and locals will certainly smell it, so do keep windows and doors shut.

“Self-storage units are technically very difficult fires to manage, as well as the fire loading it’s difficult to know what is being stored, which is another reason why we will have lots of appliances in the area for most of today.”

The road around the storage unit remains closed while emergency services continue to work at the scene.