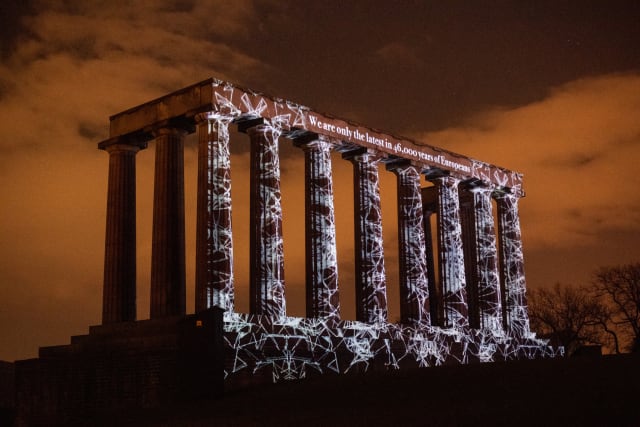 Love letters to Europe from writers in Scotland are being projected onto six buildings across Edinburgh as part of the city’s Hogmanay celebrations.

The Messages from the Skies illuminations feature work from six Scottish or Scotland-based authors, poets and playwrights beamed onto landmarks each night.

The letters celebrate Scotland’s shared historic, social and cultural connections with the continent and will appear on Leith Library, Bongo Club in the Cowgate, The National Monument of Scotland on Calton Hill, Tech Cube at Summerhall, Leith Custom House on the Shore and Tron Kirk in Hunter Square.

Developed in partnership with the Edinburgh International Book Festival and Edinburgh UNESCO City of Literature, the buildings will be lit up by the love letters from dusk until 10pm every day until January 25.

At Leith’s Custom House, author Chitra Ramaswamy’s letter explores her experience as a second-generation immigrant, her childhood in London and moving to Edinburgh as an adult. It is accompanied by a soundtrack composed and performed by Emma Pollock, with visuals by filmmaker Daniel Warren using archive and live action footage.

The myths and legends of Europa are the subject of Highlands-based Kapka Kassabova’s letter that lights up the National Monument of Scotland on Calton Hill.

Images from Kapka’s writing are projected onto the monument, coming into focus before dissolving as Pippa Murphy’s soundtrack inspired by ancient Greek, Mesopotamian and Gaelic female chanting plays out.

Author and radio presenter Louise Welsh’s piece features words translated between Scots and languages from mainland Europe, considering the shared origins and cultures across the continent, at the Tech Cube display in Summerhall.

A poetic letter charting the decline of a relationship, penned by playwright Stef Smith, is being projected onto the Bongo Club in Cowgate, with a score from MJ McCarthy and watercolour illustration from Eleanor Meredith.

Scottish poet William “Billy” Letford’s lyrical letter at Leith Library draws on nostalgia of a past love with whom he explored Italy in his youth. His words animated by James Houston’s typographical response to the rhythm and pace of Billy’s writing.