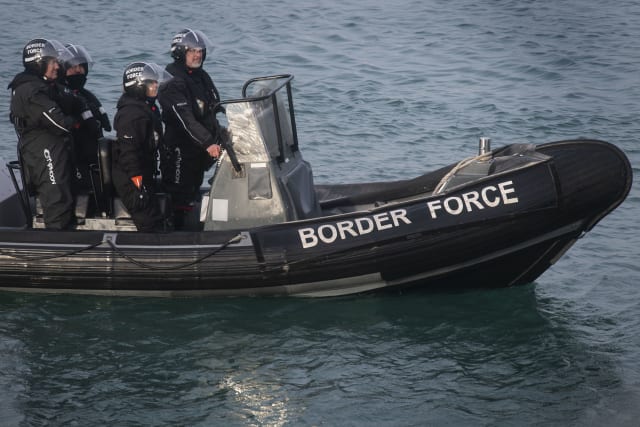 The UK and France have agreed to step up action to deal with migrants making the perilous attempt to cross the English Channel in small boats.

An “enhanced action plan” to be launched in the coming week will include increased joint patrols and surveillance, disruption of organised trafficking gangs and efforts to raise awareness among migrants of the dangers of a Channel crossing.

The plan was agreed in a phone call between Sajid Javid and his French counterpart Christophe Castaner after the Home Secretary cut short a family Christmas break to return to the UK and deal with the problem.

Mr Javid has come under growing pressure to act, with Labour accusing him of being “slow to respond” and one Conservative MP telling him to “get a grip”.

In the latest in a sequence of Channel crossings, six Iranian men were found on a Kent beach early on Sunday having arrived from France in a rigid-hulled inflatable boat.

The group were handed over to immigration authorities after being spotted in Kingsdown near Deal in Kent.

In his call, Mr Javid assured the French Interior Minister of the UK’s commitment to supporting his country’s efforts to tackle the problem, including by supplying personnel and equipment.

The two men agreed on the need to “ramp up” co-operation and will meet face-to-face in January to assess whether further action is required, the Home Office said.

Mr Javid will chair a meeting on Monday to discuss further action with senior officials from Government departments and agencies, including Border Force and the National Crime Agency.

Mr Castaner offered reassurances over France’s efforts to break up people-smuggling gangs, pointing to the dismantling on December 19 of an entire organised crime group that had been trafficking migrants through the country.

Thanking the French minister for his “partnership”, Mr Javid said: “The UK and France will build on our joint efforts to deter illegal migration – protecting our borders and human life.”

The Home Office said increased activity would be led from the UK-France Co-ordination Centre at Coquelles, near Calais.

Mr Javid declared a “major incident” on Friday after dozens of migrants in small boats arrived on the Kent coast over the Christmas period.

He promised to do more to tackle the issue, saying it is of “grave concern” that people are attempting the perilous crossing.

In the face of calls for more Border Force cutters to be deployed in the Channel, he said it was “vital we strike a balance between protecting them and protecting our borders”, and avoid encouraging more people to take the risk.

Writing in the Sunday Mirror, Ms Abbott said: “He has still to explain exactly how the Government plans to handle these mass criminal operations in British waters.

“The Home Office’s flawed strategy has been to focus on deterring refugees, thinking that the issues in the Mediterranean would never reach our shores.

“While the Tories wax lyrical about control of our borders and being tough on security, they cannot seem to get a grip on criminal smugglers operating on a few hundred miles of coastline in one of the busiest shipping lanes in the world.”

Mr Javid also came under fire from Rehman Chishti, the Tory MP for the Kent seat of Gillingham & Rainham, who sits on the Home Affairs Select Committee.

He told the Sunday Telegraph there has been “a lack of leadership to get a grip on this issue”.

Mr Chishti added: “They have not got a grip on it. What we have got is unsatisfactory and somebody has to do something. Ultimately the buck stops with the Home Secretary.”

Mr Javid appeared before the Home Affairs Committee in November when he was asked about the measures being taken to stem the number of migrants attempting the crossing.

He said he was considering whether to bring Border Force cutters on search-and-rescue operations in the Mediterranean back to the Channel, although he was yet to make a decision.

On Saturday, Mr Javid said he was keeping the number of Border Force vessels in the Channel “under close review”, adding there was “no one easy answer”.

Writing in the Mail on Sunday, Tory MP for Dover and Deal Charlie Elphicke called for all five cutters to be deployed in the Channel as a “powerful deterrent”.

“This cannot be done on the cheap with the half-hearted Dad’s Army-type setup suggested by the Home Office in the past,” he said.

Defence Secretary Gavin Williamson said the armed forces were ready to offer help if needed but there had no requests from the Home Office.

Chris Hogben, the head of the National Crime Agency-led Project Invigor, warned more crossings were “likely” in the coming weeks.

Mr Hogben said “significant resources” were being devoted to helping French authorities disrupt trafficking activities and dozens of crossing have been prevented, while “three suspected facilitators” had been arrested and charged.

The charity Detention Action said the reason for the crisis was the Government’s failure to create safe and legal routes for people to claim asylum in Britain.

“Instead of laying the blame solely at the hands of criminal gangs, Sajid Javid must step up and provide safe passage for those in distress if he wants to avoid further human tragedy,” the charity said in a statement.