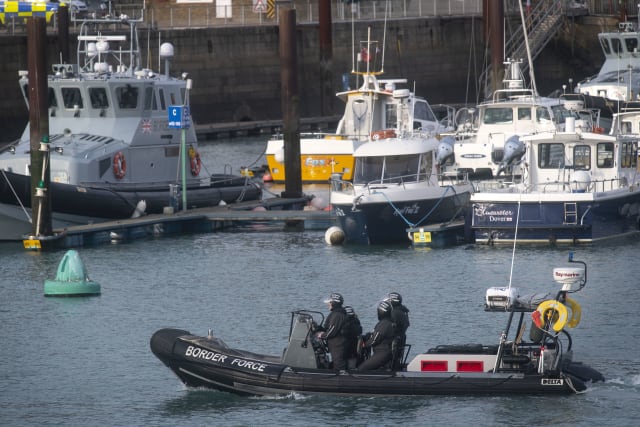 Home Secretary Sajid Javid is holding talks with Whitehall chiefs on Monday as he prepares to step up action on migrants’ attempts to reach Britain by boat from France.

Mr Javid cut short a family holiday in South Africa to take personal control of the situation, which has seen almost 100 migrants making the perilous Channel crossing in dinghies and other small craft over the Christmas period.

But writing in the Daily Telegraph, he admitted that many of the factors behind the increase in crossings are “outside of our control”.

Journeys are being fuelled by instability in the Middle East, organised crime and tighter security at Calais, he said, adding: “Unfortunately there are no easy answers.”

He added: “While we have obligations to genuine asylum seekers… we will not stand by and allow reckless criminals to take advantage of some of the most vulnerable people in our global society.”

In phone talks on Sunday, which the Home Office described as “significant and productive”, Mr Javid and his French counterpart Christophe Castaner agreed to ramp up co-operation to stop the crossings.

An “enhanced action plan” to be launched this week will include increased joint patrols and surveillance, disruption of organised trafficking gangs and efforts to raise awareness among migrants of the dangers of a Channel crossing.

But Mr Javid faced accusations of over-egging the scale of the problem, with shadow home secretary Diane Abbott telling the Guardian: “There’s no question that with Brexit, and also with the approach of the meaningful vote in January, people are being whipped up about migration issues, because the Government thinks this is the best way of frightening people to vote for their deal.”

Labour leader Jeremy Corbyn called for a more welcoming approach, tweeting: “We have a duty to reach out the hand of humanity, support and friendship to people who are in danger and seeking a place of safety.”

Mr Javid has come under growing pressure from his own backbenches to act, with Kent MP Rehman Chishti telling him to “get a grip”.

Dover MP Charlie Elphicke repeated calls for Border Force cutters to be brought back from search-and-rescue operations in the Mediterranean to patrol the Channel.

Defence Secretary Gavin Williamson said the armed forces were ready to offer help if needed, but there had been no requests from the Home Office.

In the latest in a sequence of Channel crossings, six Iranian men were found on a Kent beach early on Sunday having arrived from France in a rigid-hulled inflatable boat.

The group were handed over to immigration authorities after being spotted in Kingsdown, near Deal.

Monday’s meeting to discuss further action will involve senior officials from Government departments and agencies, including Border Force and the National Crime Agency.

In his call with Mr Castaner, Mr Javid assured the French Interior Minister of the UK’s commitment to supporting his country’s efforts to tackle the problem, including by supplying personnel and equipment.

The two men agreed to meet face-to-face in January to assess whether further action is required, the Home Office said.

Mr Castaner offered reassurances over France’s efforts to break up people-smuggling gangs, pointing to the dismantling on December 19 of an entire organised crime group that had been trafficking migrants through the country.

Thanking the French minister for his “partnership”, Mr Javid said: “The UK and France will build on our joint efforts to deter illegal migration – protecting our borders and human life.”

Mr Elphicke said: “I welcome the Home Secretary taking personal responsibility for the situation. Illegal crossings have now been on the increase for more than two months and more needs to be done as a matter of urgency.”

But he added: “It falls short of the kind of joint action and operations needed on the English Channel – specifically for the immediate return to France of people found making illegal crossings.

“Moreover, we cannot simply leave it to the French. I am calling for our Border Force cutters currently cruising the Mediterranean to return to UK waters and form a new Dover Patrol to take back control of our borders immediately.”

Mr Javid declared a “major incident” on Friday after dozens of migrants in small boats arrived on the Kent coast over the Christmas period.

But he resisted calls to deploy more cutters to the Channel, saying he was keeping the number of vessels available to the Border Force “under close review”.

He warned that more boats might act as a magnet for migrants hoping to be picked up and taken to the UK.

Writing in the Daily Telegraph, ex-Ukip leader Nigel Farage said Mr Javid could become the next prime minister if he followed the lead of former Australian PM Tony Abbott to “make it crystal clear that any individual who crosses the Channel by dinghy and illegally enters British waters will not be allowed to stay in our country”.