Museum waxes lyrical about effect of pope’s visit to Ireland 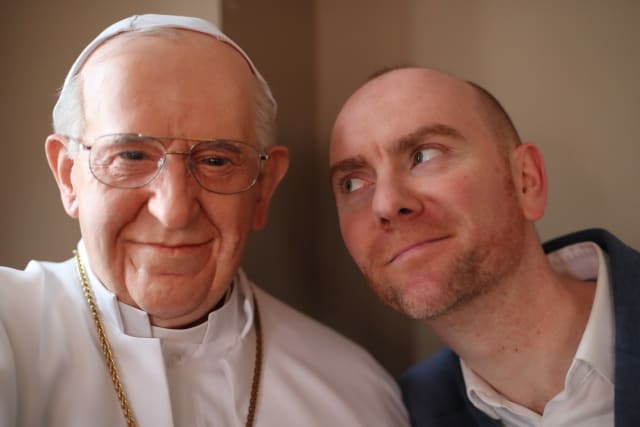 The papal visit to Ireland has ended up being a blessing for one well-known Dublin tourism spot.

Visitor numbers to the National Wax Museum Plus in the Irish capital have swelled since Pope Francis made his historic visit to the country in August.

The museum has positioned the life-like waxwork next to the chair from the refurbished 1979 Popemobile.

“You can sit in Pope John Paul II’s chair beside Francis or stand beside Pope Francis and get your photograph taken with him,” Mr Coleman said.

Just days before the pontiff visited Ireland, the museum unveiled a waxwork of him and the refurbished Popemobile used by John Paul II during his historic visit to Ireland in 1979.

Crowds gathered on O’Connell Street as the Popemobile took to the streets with the waxwork of the popes on board.

“We weren’t expecting the reaction that we got from (it),” he said.

Mr Coleman added: “We made so many people’s days when we brought Pope Francis out on to the street. So many people were stopping by and getting photos done.”

And the pope is not the only major attraction in the museum.

“We have Donald Trump on the other side of the room,” he said.

Mr Coleman said the controversial US president was also proving popular with the public.

“It sparks emotion and that’s what we’re trying to do.”

Mr Coleman described trading during the month of October as “unprecedented”.

“We weren’t expecting it to be as high as it was,” he said.

“We saw a massive spike and we had almost 12,000 visitors in October, up 20% (on last year)… It’s the busiest October since the museum opened more than 30 years ago.”

Mr Coleman added: “We do attribute a lot of that to the publicity we did around the pope’s visit, so we feel very delighted about how it all worked out.”

He said it had helped the museum pull itself back from a difficult summer due to the extraordinarily hot weather the country experienced.

Mr Coleman said that during the summer people were opting for outdoor activities over visiting a museum.

“I don’t think we’re going to get there. Even though the October was so busy, it still doesn’t account for the drop-off in summer.”

Mr Coleman is excited about the museum’s plans in 2019 for a Game Of Thrones-themed exhibition, which will open to coincide with the release of the final series of the programme.

“It’s going to feel like you’re going to be walking into one of the locations in Game Of Thrones,” he said.

Among the waxworks being considered are Daenerys Targaryen, portrayed by Emilia Clarke, and Ser Davos Seaworth, played by Liam Cunningham.