European Union not trying to keep Britain in, says Juncker 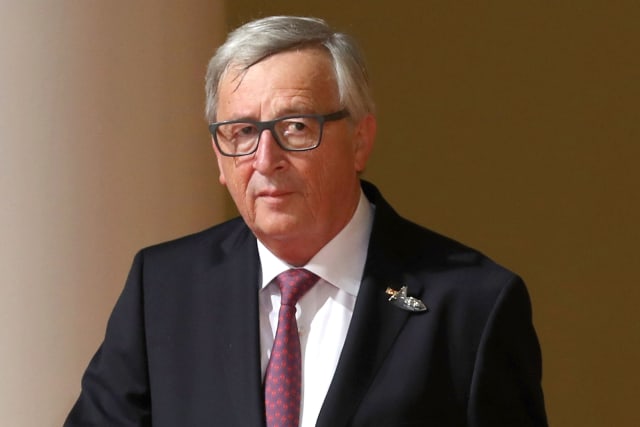 Jean-Claude Juncker has called on the United Kingdom to “get your act together” over Brexit, branding some Britons “entirely unreasonable” for expecting Brussels to put forward a solution.

The European Commission president also rejected claims of a plot to keep the UK in the EU “by all possible means” and revealed he fears the majority of MPs “deeply distrust” both the EU and Theresa May.

The top Eurocrat’s comments to German newspaper Welt am Sonntag were published as Cabinet Brexiteer Liam Fox said the chances of Britain leaving the European Union will be little more than “50-50” if the Prime Minister’s deal is rejected by Parliament.

The International Trade Secretary warned fellow MPs that failure to pass Mrs May’s deal would be “incendiary” and said it was “a matter of honour” for them to support the PM.

MPs are due to vote on the Withdrawal Agreement in the week of January 7 after Mrs May, facing the prospect of a significant defeat, pulled the original date of December 11.

However the bid to buy more time to secure key concessions on the Irish backstop, the key flashpoint for DUP and Brexiteer detractors of the deal, appeared to falter when her fellow leaders refused to change the legal text of the agreement.

The PM said talks would continue, although the EU has repeatedly warned negotiations over the withdrawal agreement will not be reopened.

Should MPs reject it when they vote in the coming weeks it could raise the prospect of no-deal and with it the risk of heavy economic consequences for the UK and EU, or a second referendum on Brexit.

“I find it entirely unreasonable for parts of the British public to believe that it is for the EU alone to propose a solution for all future British problems.

“My appeal is this: get your act together and then tell us what it is you want. Our proposed solutions have been on the table for months.”

Mr Juncker said it was up to the British to decide if the final decision is put back to the people in a second referendum or so-called People’s Vote.

However he said he was “working on the assumption that (the UK) will leave, because that is what the people of the United Kingdom have decided”.

“I have the impression that the majority of British MPs deeply distrust both the EU and Mrs May,” Mr Juncker added.

“It is being insinuated that our aim is to keep the United Kingdom in the EU by all possible means. That is not our intention.”

Dr Fox told the Sunday Times that Brexit will only be “100% certain” if the House of Commons backs the Prime Minister’s deal in a crunch vote next month.

The International Trade Secretary warned fellow MPs that failure to pass Mrs May’s deal would be “incendiary” and said it was “a matter of honour” for them to support the PM.

Having given the public the right to decide on EU membership in a referendum, “Parliament cannot now, with any honour, renege on that result”, said Dr Fox.

“Were they to do so, I think you would shatter the bond of trust between the electorate and Parliament. And I think that would put us into unprecedented territory with unknowable consequences.”

Campaigners for a second EU referendum seized on the International Trade Secretary’s comments, saying that polls suggested that fewer than 50% of Britons now want to leave the EU.