Dry and mild weather to welcome in the New Year

Crowds enjoying New Year's Eve celebrations across the country can expect dry and mild weather as the clocks strike midnight, according to the Met Office.

Those with tickets for London's fireworks show or Edinburgh's Hogmanay celebrations will see warmer than usual temperatures of around 8C, but are still being urged to wrap up warm for the outdoors.

Monday is expected to be a grey start for many, with conditions expected to brighten up throughout the day with some sunny spells across England and Wales.

A forecaster from the Met Office said: "It's a similar start tomorrow to the rest of the weekend, cloudy for many with some areas of drizzle. 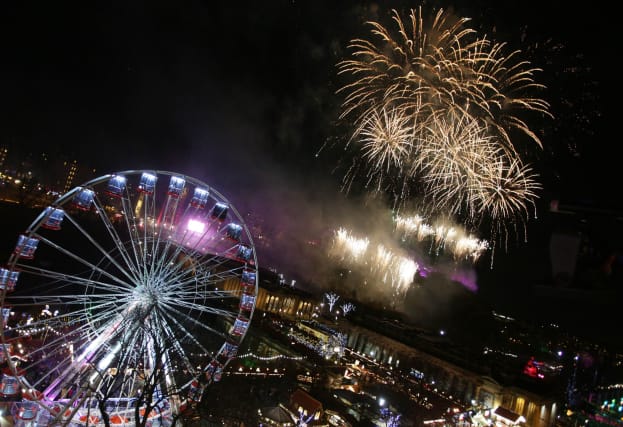 "At midnight itself across the whole of the UK it should be mostly dry, but it will be cloudy."

The early evening is forecast to be wet and windy across Scotland, particularly in northern parts, where gusts could reach between 40 and 50 mph.

A yellow weather warning has been issued from 5pm on New Year's Eve to 5am on New Year's Day for Orkney and Shetland, where transport is expected to be delayed due to winds of 70mph.

The weather in Edinburgh should improve further into the evening as the new year approaches, due to a band of patchy rain moving southwards.

Looking ahead to Tuesday, the Met Office said: "That band of patchy rain slowly pushes southwards through the day across parts of parts of England and Wales.

"It'll turn sunny across northern England, northern Ireland and Scotland into the afternoon.

"Ahead of that band of cloud and rain it will still stay mild with highs of around 11 degrees in the south, with the best of the sunshine in the north and east."

The week's warmer than usual weather will round off a year which saw scorching summer temperatures across the UK.