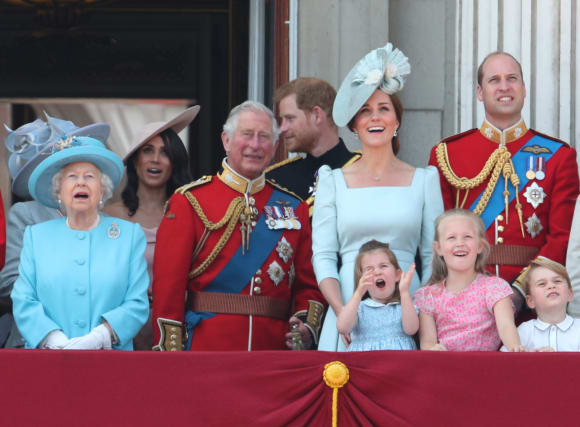 Big on the royal front in 2019 will be the arrival of the Duke and Duchess of Sussex’s baby.

“Our little bump”, as Harry as dubbed his first-born, will be putting in an appearance in the spring, and is believed to be due in April.

Seventh in line to the throne, and the Queen and the Duke of Edinburgh’s eighth great-grandchild, baby Sussex is joining a large brood of next-generation royals including his or her cousins Prince George, Princess Charlotte and Prince Louis.

Royal fans will be hoping Harry and Meghan introduce their baby to the world in a debut photocall.

The Duke and Duchess of Cambridge did so with all three of their children on the steps of the private maternity ward the Lindo Wing in west London.

It is not yet known whether Meghan will follow in Kate’s footsteps and opt for the Lindo, where Harry was also born in 1984, or whether she will perhaps choose a home birth, or a hospital near their future home Frogmore Cottage.

The pair will be moving into their new secluded official residence on the Windsor Estate early in the year.

Harry and Meghan may head off for a babymoon – a last holiday before their child is born, while the duchess’s friends are likely to arrange a baby shower for her ahead of the big day.

Favourite names among the bookmakers are Diana, after the duke’s late mother, Victoria and Elizabeth for a girl, and James, Albert, Philip and Arthur for a boy.

American former actress Meghan will also complete her first year as a royal as she and Harry celebrate their first wedding anniversary on May 19.

Princess Charlotte has a big milestone ahead as she turns four in May and starts school in September, when she will most likely join older brother Prince George at private school Thomas’s Battersea.

George will be celebrating his sixth birthday in July, while the youngest Cambridge sibling, Prince Louis, turns one in April.

Another royal wedding is taking place in 2019 but on a smaller scale.

Lady Gabriella Windsor – the daughter of Prince and Princess Michael of Kent – is expected to wed fiance Tom Kingston in the spring.

Notable milestones also include the 20th anniversary of “Operation Ritz” – the first public photograph of Charles and his long-term love Camilla Parker Bowles as a couple, outside the Ritz hotel in London.

Charles and Camilla, now the Duchess of Cornwall, went on to marry in 2005, but, following the death of Charles’s ex-wife Diana, Princess of Wales, in 1997, Camilla had stayed mostly out of the limelight.

On January 28 1999, the future king and his former mistress finally stepped out together as a couple as they left Mrs Parker Bowles’s sister’s 50th birthday party.

Some 200 photographers were ready for the brief but significant appearance which was masterminded by Charles’s spindoctor, Mark Bolland.

Major commemorations over the next 12 months include the 70th anniversary of the modern Commonwealth.

The Declaration also emphasised the freedom and equality of its members and the prefix “British” was dropped from the title.

With the Queen the Head of the Commonwealth, the Prince of Wales its future head, and Harry and Meghan taking a lead on Commonwealth Youth Matters, the royals will be expected to mark the 70th anniversary.

2019 also sees the 200th anniversary of the birth of Queen Victoria in May, and the occasion is being recognised with a new exhibition at Kensington Palace where she was born.

The homelessness charity Centrepoint will be marking its 50th anniversary in 2019, and the Duke of Cambridge is certain to be involved.

Centrepoint was the first organisation William took on as patron and it was a favourite cause of Diana, who took her sons on private visits to shelters when they were young.

Combat Stress, the mental health charity for military veterans of which Charles is patron, will be marking its centenary, while Cruse Bereavement Care, which helps people deal with the death of a loved one and of which the Queen is patron, reaches its 60th anniversary.

On a personal note, the Earl and Countess of Wessex will be celebrating their 20th wedding anniversary in June.

The Queen’s youngest son, Edward, married Sophie Rhys-Jones in St George’s Chapel, Windsor Castle, in 1999, and he is the only one of the Queen’s children not to have got divorced.