A royal year in review: A look back at the last 12 months for the Windsors 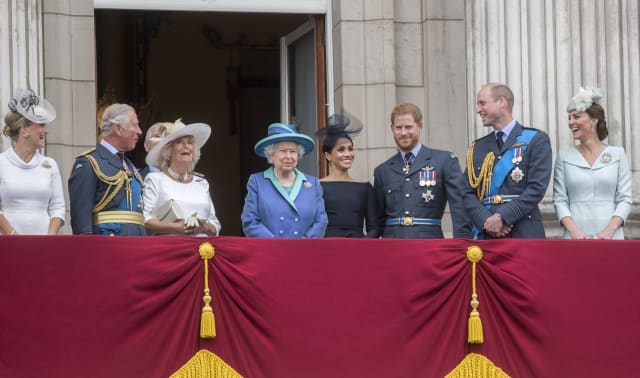 2018 was a year of celebration for the royal family, with two royal weddings, two babies and another on the way.

Here’s a look at how the year panned out for the Windsors.

The Duke and Duchess of Cambridge released sweet photographs of fourth in line to the throne Charlotte, ready for her first day.

William and Kate, who were expecting their third child, carried out a brief official visit to Sweden and Norway amid freezing temperatures and played an unusual form of hockey called bandy in Stockholm.

Princess Eugenie’s engagement to Jack Brooksbank was announced and Zara and Mike Tindall said they were expecting their second child.

Meanwhile, Prince Harry and Meghan Markle continued their tour of the UK ahead of their wedding, visiting youth-orientated radio station Reprezent FM in Brixton, south London, and Cardiff Castle and a community centre on an away day to south Wales.

Meghan took part in her first joint engagement with William, Kate and Harry when she took to the stage with them at a Royal Foundation forum in February.

The former actress showed her support for the #MeToo and Time’s Up Campaigns during an on-stage Q&A – and the quartet were dubbed the “Fab Four”.

The Queen was the star of London Fashion Week when she took a seat in the front row to watch a catwalk show.

Harry and Meghan carried out visits to Birmingham and Belfast.

Former Suits star Meghan also took part in her first official event with the Queen when she joined the monarch and senior royals at the Commonwealth Day Service in Westminster Abbey.

Heavily pregnant Kate resisted the temptation of a St Patrick’s Day tipple during a traditional toast to her and her husband by the Irish Guards in west London, sipping sparkling water instead.

The Duke of Edinburgh had a hip replacement operation in early April, spending a week and a half in hospital, before convalescing in Windsor Castle.

Meanwhile, Charles went to Australia to open the Commonwealth Games, and also visited the South Pacific island of Vanuatu.

His future Commonwealth role was secured at the Commonwealth Heads of Government Meeting (CHOGM) in London, when, in an unprecedented move, the Queen publicly spoke of her wish that he would be the future head of the family of nations when he is king.

World leaders backed the decision, and Harry, who was appointed as Commonwealth Youth Ambassador, Meghan and William took part in CHOGM events.

Kate, who was due to give birth any day, stayed at home, and baby Prince Louis put in an appearance on April 23 – patriotic St George’s Day.

The 8lb 7oz baby, whose name was not announced until four days later, made his debut on the steps of the Lindo Wing with his parents.

May was the month Harry and Meghan pledged their love for one another in a star-studded royal wedding in the 15th-century St George’s Chapel at Windsor Castle.

An emotional Harry was captivated by his bride as they met at the altar, telling her: “You look amazing. I missed you.”

Crowds flocked to see the newlyweds and the new Duke and Duchess of Sussex kissed on the West Steps of the chapel.

Prince George and Princess Charlotte, who celebrated her third birthday earlier in the month, were among the pageboys and bridesmaids, and Philip, recovered from his operation, put in an appearance.

There was drama in the run-up to the big day with Meghan’s father Thomas Markle pulling out of walking her through the Quire to the altar due to illness, and after being caught staging paparazzi photographs.

The royals gathered for the annual Trooping the Colour ceremony, and Meghan took her place on the Buckingham Palace balcony for the first time.

Meghan undertook her first joint engagement with the Queen on a day trip to Cheshire, and body language experts said the pair got on famously.

Zara and Mike Tindall welcomed their baby daughter Lena Elizabeth Tindall on June 18 – a sister for Mia, and the second royal baby to arrive in 2018.

William carried out a historic trip to the Middle East, becoming the first member of the royal family to make an official trip to either the Occupied Palestinian Territories or Israel on behalf of the Government.

The duke sat down with Palestinian leader Mahmoud Abbas, and carried with him a “message of peace” from Israel’s President Reuven Rivlin in an effort to rekindle relationships.

Prince Louis, by now 11 weeks old, took centre stage and was on his best behaviour when he was christened in the Chapel Royal, watched by Prince George and Princess Charlotte.

Proud parents William and Kate were joined by Harry, Meghan and other close relatives, but the Queen and the Duke of Edinburgh did not attend – with the monarch staying in Norfolk ahead of a busy week of engagements.

The royals were out in force for the centenary of the RAF, attending a service at Westminster Abbey, a presentation of a new Queen’s Colour on the forecourt of Buckingham Palace, and a flypast.

Harry and Meghan headed to Dublin – their first official overseas trip as a married couple – and visited Croke Park stadium, the scene of the Bloody Sunday atrocity committed by British troops against civilians in 1920.

Then President Trump came to town.

The Queen welcomed the American leader to tea at Windsor Castle.

As they inspected a Guard of Honour, Donald Trump walked along before standing still in front of the Queen, meaning the monarch had to navigate her way around him so they could walk side by side.

Mr Trump later said of the Queen in an interview: “That is a beautiful woman.”

They later holidayed with George and Amal Clooney in Italy, and the royal family enjoyed their annual break in Balmoral in Scotland

William joined Prime Minister Theresa May in France to mark the centenary of the First World War Battle of Amiens.

The Queen, with the Prince of Wales and the Princess Royal, was in good spirits at the annual Braemar Royal Highland Gathering.

Harry and Meghan attended the WellChild Awards, and Charles was honoured with a lifetime achievement award in the GQ Men of the Year Awards for his charity work.

William launched the Mental Health at Work initiative in Bristol, which is aimed at improving workplace well-being, and revealed he took some of the troubling aspects of his air ambulance pilot job home.

Meghan brought her mother Doria Ragland to the launch of the Grenfell community cookbook she has championed – and helped prepare lunch for the guests at the Hubb Community Kitchen.

Harry and Meghan went on an away day to Sussex, the county that inspired their royal titles – travelling to Chichester, Bognor Regis, Peacehaven and Brighton.

She may only be ninth in line to the throne, but the Duke of York’s daughter was treated to a glittering ceremony in St George’s Chapel and a weekend of extended celebrations.

Her exuberant mother Sarah, Duchess of York was back centre stage after years as an outcast from the Windsors.

George and Charlotte were among the young helpers, along with Robbie Williams’ daughter Theodora.

Supermodels, singers and actors were among the guests.

Then, on the day the Duke and Duchess of Sussex were starting their official tour of Australia, New Zealand, Fiji and Tonga, came the news that Meghan was pregnant with their first child.

The royal couple shared the news with their family at Eugenie’s wedding.

Their marathon tour to four countries over 16 days featured more than 70 engagements.

Highlights included a trip to Bondi beach in Australia, and a Maori welcome in Rotorua, New Zealand.

This year’s poignant Remembrance Day fell on the centenary of Armistice Day – 100 years since the end of the First World War.

The Prince of Wales laid a wreath on behalf of the Queen as the monarch, the Duchess of Cornwall, Kate and Meghan watched from nearby balconies.

Charles – who made an official tour to Gambia, Ghana and Nigeria – turned 70 on November 14 and in a television documentary insisted he would stop speaking out on issues when he becomes king, saying he was “not that stupid”.

The Queen hosted at a glittering private black-tie party for her eldest son at Buckingham Palace, and paid tribute to Charles, describing him as “a dedicated and respected heir to the throne to stand comparison with any in history — and a wonderful father”.

Harry and Meghan met Take That at the Royal Variety Performance, and it was revealed that they will be moving to Frogmore Cottage, setting up in their new home on the Windsor Estate in the new year.

Meanwhile, reports abounded as to the reason for the move amid speculation over Meghan and Kate’s relationship.

William and Kate had a snowball fight at Kensington Palace after staging a Santa’s grotto for RAF families separated from their loved ones.

They also made a whirlwind trip to the RAF Akrotiri base in Cyprus to say thank you on behalf of the nation to Britain’s Armed Forces serving overseas at Christmas.

The Cambridges joined the Queen and Charles and Camilla at the annual white tie Diplomatic Corps reception.

On Christmas Day, the royal family attended morning worship in Sandringham, although the Duke of Edinburgh was absent, relaxing with his family, while the Duchess of Cornwall was also missing, because of a heavy cold.

And the Queen joked about being a grandmother in her Christmas Day message, saying family events like weddings and births had kept her “well occupied” this year.