A chance of rain for Edinburgh Hogmanay, forecasters warn 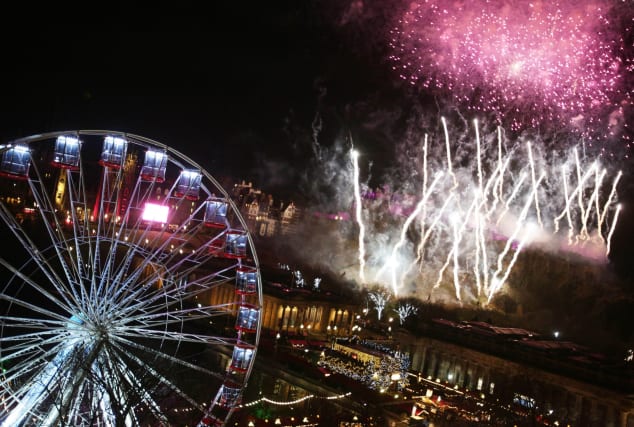 Revellers heading to Edinburgh’s Hogmanay street party could need their umbrellas, with a chance of light rain in the evening.

Forecasters said conditions are likely to be unsettled and “breezy”, with gusts of up to 35mph possible on New Year’s Eve.

However, the weather is expected to be dry for the torchlight procession which starts Edinburgh’s Hogmanay celebrations on Sunday evening.

Tens of thousands of people are expected to take part in the procession along the Royal Mile and into Holyrood Park on December 30.

The following evening, 75,000 people are expected to attend the street party, concert in the gardens and ceilidh under the castle.

Forecasters have warned that the weather may be unsettled for New Year’s Eve.

Met Office forecaster Matt Box said: “It should stay quite dry during the day and it could be quite breezy through Monday.

“But we could see some rain in the evening, light in nature, and it will stay fairly breezy into the evening.

“We could see some gusts up to about 35mph, so it’s looking a bit unsettled for any new year celebrations. There could be light rain or drizzle.”

This year, Edinburgh’s Hogmanay celebrations will mark the ties between Scotland and Europe as the UK prepares to leave the EU.

On December 31, bands, DJs, street performers, dancers, acrobats, disco divas and fire eaters from Scotland and mainland Europe will be performing at the street party, which starts at 7.30pm.

There will be music across three stages, with Gerry Cinnamon headlining the Waverley stage, Judge Jules headlining the DJ stage in Castle Street and Elephant Sessions on stage in South St David Street.

Franz Ferdinand will headline the Concert in the Gardens at the foot of Castle Rock, supported by Metronomy and Free Love, while some of the country’s top ceilidh bands will play at Ceilidh under the Castle.

At midnight, German band Meute will provide the soundtrack to the fireworks display from Edinburgh Castle.

A no-fly zone will be in place for aircraft, including drones, during both the torchlight procession and Hogmanay street party.

Chief Superintendent Kenny MacDonald said: “To make sure you get entry to the event arena as quickly as possible, people should not bring large bags with them. There will be searches carried out, so please allow time for this to happen.

“Safety is a top priority for Police Scotland and we ask revellers to act responsibly and not let their enjoyment of the evening be ruined by over-consumption of alcohol. We urge people to look after each other, family and friends.”

The festivities continue on New Year’s Day when hardy people plunge into the chilly waters of the Firth of Forth in the Loony Dook at South Queensferry.

The McEwan Hall will be a Hogmanay venue for the first time, hosting three major concerts – Symphonic Ibiza on December 30 and Capercaillie and Carlos Nunez with special guests on January 1.

Meanwhile, Message from the Skies asks six leading writers – Billy Letford, Chitra Ramaswamy, Kapka Kassabova, Louise Welsh, Stef Smith and William Dalrymple – to each write a love letter to Europe which will be illuminated onto buildings around the city.

Co-commissioned with the Edinburgh International Book Festival, it runs from January 1 to 25.