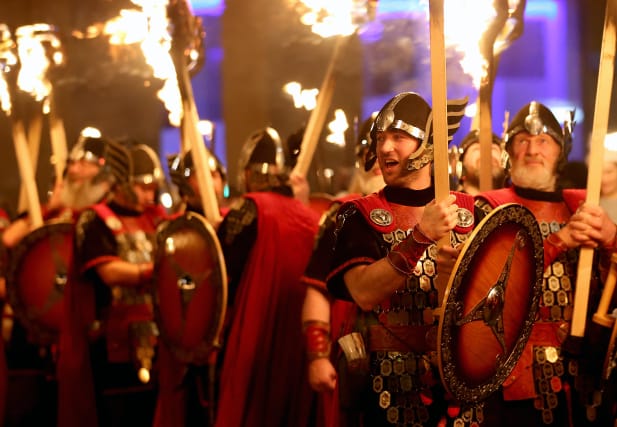 Tens of thousands of people are expected to take part in a torchlight procession through Edinburgh to start this year’s Hogmanay celebrations.

Locals and tourists will take part in Sunday’s walk which will also include pipers, drummers and dance groups along the Royal Mile.

As part of the Year of Young People events, youth groups will lead the procession into Holyrood Park where the outline of Scotland will be lit by torches.

Organisers have already revealed that Edinburgh’s Hogmanay celebrations will mark the ties between Scotland and Europe as the UK prepares to leave the EU.

Charlie Wood and Ed Bartlam, directors of Edinburgh’s Hogmanay, said: “The torchlight procession is Edinburgh Hogmanay’s iconic opening event and this year will close the Year of Young People with ScotArt.

“We’re expecting tens of thousands on the procession and as spectators.

“At the finale in Holyrood Park, the torchbearers will form the burning outline of Scotland and in the middle, the ScotArt sculptures which have been designed by young people across Scotland will be put together in a heart shape and set alight. The image will rightly place young people and their creativity right at the heart of Scotland.

“This year’s Edinburgh’s Hogmanay has a fantastic line-up of events for young and old under the banner We Love You, a celebration of Scotland’s long-standing cultural ties with Europe.”

Edinburgh Lord Provost Frank Ross said: “It is a special moment to lead such a breathtaking torchlight procession through Scotland’s capital and to see people come together from all over the world to celebrate the start of Edinburgh’s Hogmanay.

“You see the city at its best and you can’t help but feel proud of its streets and its people.”

Meanwhile, police have urged everyone attending Hogmanay events in the capital to plan ahead.

Chief Superintendent Kenny MacDonald said: “To make sure you get entry to the event arena as quickly as possible, people should not bring large bags with them. There will be searches carried out so please allow time for this to happen.

“Safety is a top priority for Police Scotland and we ask revellers to act responsibly and not let their enjoyment of the evening be ruined by over-consumption of alcohol. We urge people to look after each other, family and friends.

“The street party is a lively occasion and our officers will provide a high-visibility presence, both within the event arena and the surrounding areas, and can be approached with any concerns or inquiries.

“On behalf of Edinburgh division, I would like to wish everyone a safe and enjoyable Hogmanay and new year.”