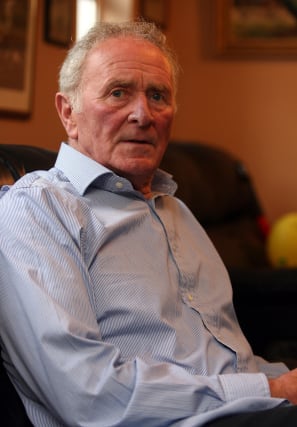 Two Northern Ireland sporting greats and the region’s first female firefighter are among those set to receive honours from the Queen.

Joining them on the New Year Honours list is Heather Smart, Northern Ireland’s first female firefighter, who will get an MBE

McBride, 78, captained the victorious 1974 Lions tour to South Africa during a distinguished career. He said he regarded his honour for services to rugby union as belonging to all his former team-mates.

In recent years he has been involved with a number of charities helping disabled and disadvantaged children.

“I’m really thrilled, a CBE is terrific. When you get to this age, you think people have forgotten about you so it is nice to be remembered,” he told the Press Association.

“1974 was my Everest, to captain the Lions, and I would like to think this honour is shared with all the guys who were on that tour, because they really were outstanding and they made my job as captain very easy.”

Gregg made himself a household name with 247 appearances for Manchester United in the 50s and 60s.

He survived the 1958 Munich air disaster which saw 23 people killed when a plane carrying the Manchester United team crashed on take-off in Germany.

The 86-year-old became a national hero after helping to pull survivors from the wreckage. While praised for his actions, he has always played down his role.

Earlier this year he travelled to Old Trafford for the 60th anniversary of the Munich crash, and said he believed it would be his last trip to the historic ground.

He is honoured for services to football.

Ms Smart, who retired earlier this year from Northern Ireland Fire and Rescue Service, has been described as a trailblazer.

She joined the service in 1991 and paved the way for the 62 women currently working as firefighters.

Alan Walmsley, Interim Chief Fire Officer, congratulated Ms Smart and described her as a “passionate advocate and ambassador for female firefighters”, who “helped change the culture of the organisation at that time”.

“This award is a fitting recognition for her achievement as Northern Ireland’s first female firefighter,” he added.

Also among the Northern Ireland contingent on the New Year Honours list were Harcourt Developments chairman Patrick Doherty, for services to the transformation of the Titanic Quarter in Belfast, and former Queen’s University vice-chancellor Professor James McElnay.

Five members of the Police Service of Northern Ireland are also honoured.

Inspector Rosie Leech will receive an MBE, recently retired Sergeant David Knox will get a British Empire Medal and three other officers will receive the Queen’s Police Medal.