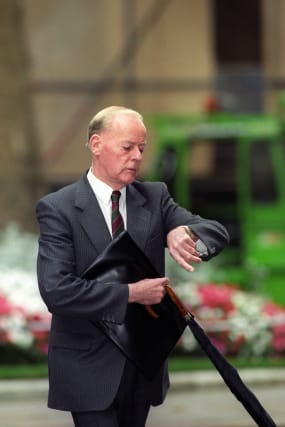 He met then prime minister Sir John Major in the weeks after the Provisionals declared their first ceasefire in 1994.

It was September 2005 before the complete decommissioning of republican arms was verified, part of a process which secured Sinn Fein’s full participation in powersharing at Stormont.

A Downing Street note from the prime minister’s private secretary from October 1994 was published by the Public Record Office of Northern Ireland (PRONI) as part of the annual release of official files.

It said: “Molyneaux wondered whether we could put the onus on the Taoiseach and the Republic of Ireland for dealing with the IRA’s weapons.”

Other files released showed that Sir John’s officials considered including reference to a weapons “amnesty” in one of his speeches during a visit he made to Northern Ireland in autumn 1994.

An official from the Northern Ireland Office (NIO) interjected that the comment would be “premature” as more preparatory work was needed.

Lord Molyneaux told the prime minister he had heard from “sensitive sources” that the Provisionals were still targeting people.

The note of the meeting, compiled by Sir Roderic Lyne, added: “Molyneaux suggested that we should conduct exploratory talks with representatives of loyalist paramilitaries and then arrange for them to hold some sort of bilateral political discussions with (NIO minister) Michael Ancram.

“He felt that the US government’s decision to waive visa restrictions on a group of loyalist paramilitaries had made it easier for Her Majesty’s Government to have contact with them.

“He did not, of course, argue that they could become full participants in the talks process.”

Lord Molyneaux also passed on a suggestion from party colleague Lord Ken Maginnis that they should not “hasten unduly” to repair Irish border roads closed during the conflict.

The official wrote: “He also seemed to be suggesting that repairing roads was not the highest priority for expenditure. I assume he had some hidden agenda.”

The unionist leader also floated reviving the Prior Assembly established by former Northern Ireland Secretary Lord Jim Prior in 1982, since the advisory body had only been prorogued.

He claimed it could be revived without new legislation as an interim step to begin restoring local democracy.

Sir Roderic wrote: “On each occasion we countered that there would be no point in doing this if the SDLP declined to participate; and we knew that the SDLP would decline, unless the assembly was part of a wider deal.

“Molyneaux acknowledged that he had no answer to this and did not press his point.”