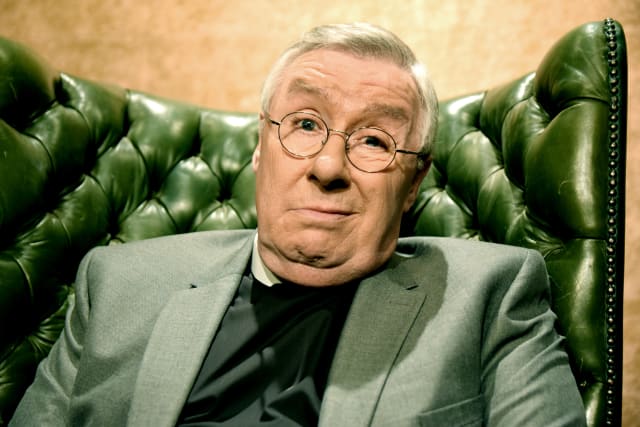 The Reverend I.M. Jolly – one of the most iconic characters in Scottish comedy history – is to return to television screens this New Year.

Gregor Fisher, best known for playing Rab C Nesbitt, will take on the role of the the morose minister made famous by by Rikki Fulton.

Fisher will don the clerical collar for a one-off sketch to mark the 40th anniversary of Scotch & Wry as part of BBC Scotland’s Hogmanay Live celebrations.

“I think there was a bit of Rikki that always saw me as the heir apparent – I’m sure he had many heirs apparent – and I think he’d like the idea of Jolly being back on screen again.

“It’s not an impression of Rikki – there wasn’t any way we would even attempt that, you just couldn’t do it. He was absolutely unique.

“The script is based on a lot of Rikki’s stuff, though, and hopefully there’s a flavour of his performances about it.

“I watched the last ever I.M. Jolly sketch that he did, just purely to get the timing of it, before I came in to film. It was great and funny and joyous. He was a one-off.”

The character first appeared in 1978 in a sketch which parodies the late-night sermon, Late Call, which aired during the 1970s and 1980s.

Fisher said that he would love to see younger audiences discover the character.

Hogmanay Live executive producer David Staite brought together the script from some of the best-known I.M. Jolly sketches, adding that the comedy has proven to be a timeless classic.

“Scotch & Wry was, and still is, such a huge part of Hogmanay in Scotland,” he said.

“The writing was so clever and has very much stood the test of time. Going over old scripts, it struck me how the lines are still as funny today as they ever were.”

Colin Gilbert, the original script editor for Scotch & Wry, has been brought in to add extra authenticity to the production.

He said: “It’s nice to be involved again all these years later. It’s a sketch that has a real place in the hearts of Scotland and was such a fixture of Hogmanay.”

Hogmanay Live will be broadcast on Monday December 31 at 11.30pm on BBC One Scotland.

Host Jackie Bird will present from the Old Fruitmarket in Glasgow and will hear from Bryan Burnett, who will be at The Mound in Edinburgh for BBC Radio Scotland.

Performances will come from Britain’s Got Talent star Alesha Dixon, BBC Folk Singer of the Year Karine Polwart and Hogmanay stalwarts Phil Cunningham and Aly Bain. Des Clarke will also give his own comedy take on the events of the past 12 months.