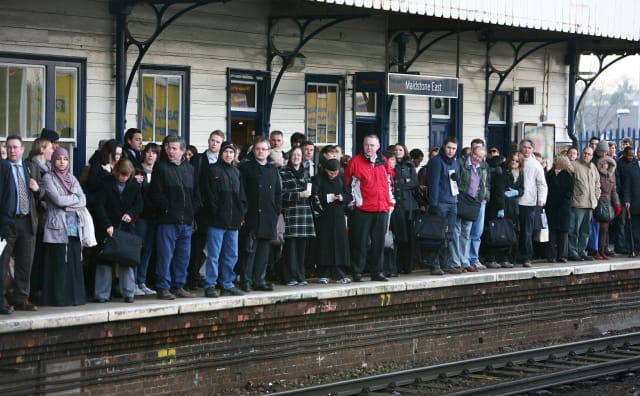 Train punctuality has slumped to a 13-year low after a series of major issues plagued Britain’s railway in 2018.

One in seven trains (14.6%) missed the industry’s Public Performance Measure (PPM) of punctuality in the 12 months to December 8, according to Office of Rail and Road (ORR) figures.

Press Association analysis of historical data revealed this annual rolling average has not been worse since September 2005.

PPM measures whether a train arrives at its final destination within five minutes of the scheduled time, or 10 minutes for a long-distance service.

Punctuality has been affected by a number of problems over the past 12 months, including extreme weather, errors in the launch of new timetables, strikes and signalling failures.

Snow and ice crippled parts of the network when the Beast from the East hit Britain in February and March, while rails buckled due to a summer heatwave just three months later.

Passengers in the north and south-east of England faced weeks of chaos when new timetables were introduced on May 20.

Several operators have suffered disruption throughout the year due to a long-running industrial dispute over guards on trains.

Punctuality has also been affected by infrastructure failures, with London Waterloo services hit by a number of signalling faults.

Anthony Smith, chief executive of passenger watchdog Transport Focus, said: “People using the railway need to be able the rely on the industry’s most basic promise – the timetable.

“If that is not delivered passengers must make their voice heard and claim compensation.

The cost of many rail season tickets will increase by more than £100 next week as average fares go up 3.1%.

There have been calls for prices to be frozen due to the poor performance of the industry.

Mr Smith added: “With rail fares set to rise yet again passengers will be looking to the rail industry to deliver a more reliable, better value for money service in 2019.”

The Department for Transport has launched a review by former British Airways chief executive Keith Williams to consider all parts of the industry.

Robert Nisbet, regional director of the Rail Delivery Group, said: “Every minute counts for our customers and we are sorry when trains don’t run on time.

“We have one of the most congested railways in Europe, which means incidents like the summer heatwave and disruption caused by new timetables have a bigger impact.

“Working together, the rail industry is learning the lessons from May while also delivering unprecedented investment to increase capacity and ease pressure on the busiest parts of the railway.”