The couple quizzed by police over the drone disruption at Gatwick Airport that caused Christmas travel chaos for thousands of passengers have said they feel "completely violated" by the experience.

Around 1,000 flights affecting some 140,000 passengers were cancelled or diverted across three days after drones were spotted inside the perimeter of the UK's second biggest airport on Wednesday.

Paul Gait and Elaine Kirk were arrested and released without charge following two nights in custody after police said they were no longer suspects.

Speaking outside their home in Crawley, West Sussex, on Monday an emotional Mr Gait said the couple were "deeply distressed" by the experience.

"As you can probably imagine we are feeling completely violated," the 47-year-old told Sky News. 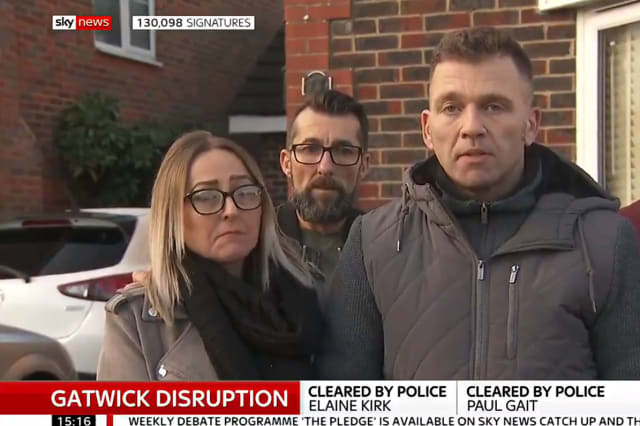 "Our home has been searched and our privacy and identity completely exposed.

"Our names, photos and other personal information have been broadcast throughout the world."

Mr Gait said he and Ms Kirk, 54, would try to get through Christmas "as best we can".

"The way we were initially perceived was disgusting, although those that know us didn't doubt us for a second," he added.

"Post release without charge or further action, we are totally overwhelmed by the support we have received from the people from all over the world and we would like to thank every single one that has done that."

Police have acknowledged that suggestions there may never have been a drone at Gatwick Airport were down to "poor communications".

On Sunday, Sussex Police said it was a "possibility" that there might never have been a drone, despite the massive disruption in the run-up to Christmas.

But following a ministerial briefing on the latest situation at the airport chaired by Transport Secretary Chris Grayling, a Government source said police accepted that there had been "poor communications".

Sussex Police Deputy Chief Constable Jo Shiner said on Monday afternoon: "We can unequivocally state that there have been numerous illegal drone sightings at the airport over three days from 19 to 21 December.

"There were numerous reports clustered around 37 occasions where a drone or drones were seen and I am keen for those responsible to be brought to justice.

"The impact of this criminal and reckless behaviour has been enormous and we are determined to locate those responsible to bring them to justice."

There had been more than 200 sightings since the first drone was spotted in the Gatwick area on Wednesday, with police taking 67 statements, including from police officers and airport staff.

Police are also carrying out a forensic investigation of a damaged drone found near the airport perimeter, close to the last reported sighting.

In a statement, the airport said: "We are clear that there were multiple confirmed sightings of drone activity at the airport. Therefore we took the necessary actions to ensure the safety of passengers using our airport.

"Safety will always be our number one priority. We continue to support the police with their investigations into this illegal and deliberate act to disrupt Gatwick Airport's operations."

The police and the Home Office were said to be working together to amplify the message that flying drones near airports was illegal.

Gatwick has offered a £50,000 reward, through Crimestoppers, and another £10,000 has been put up by the charity's chairman, Lord Ashcroft, for the arrest of those responsible for the chaos.