Chris Evans hosts his final Radio 2 show in his pyjamas 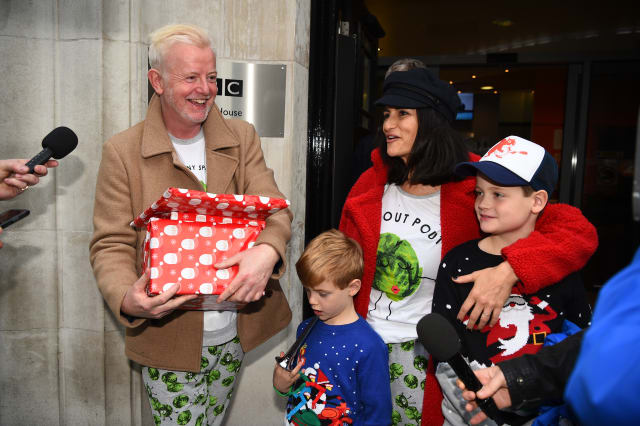 Chris Evans was all smiles when he left his last Radio 2 Breakfast Show – wearing his pyjamas.

The DJ, 52,  had his family in tow after an emotional farewell show, in which the former Top Gear host had to hold back tears.

And he told the Press Association he was looking forward to having a lie-in before he starts his new job on Virgin Radio.

“I get 28 days off, then I’m back at the coalface,” he said, as he stood outside Wogan House while wearing pyjamas emblazoned with Brussels sprouts.

“I feel sad and very happy and very excited.”

Evans was not feeling nervous about returning to Virgin almost 20 years after he was sacked for not showing up for work.

It will not be the last that the star sees of the BBC, as the DJ has signed up for what he called “Strictly Come Dancing, baby! ”

Evans has already been tipped as a winner of the show, but the broadcaster, who is being replaced by Zoe Ball on Radio 2,  downplayed his chances, saying: “I’m sure that’s not going to happen.”

He said that when deciding to leave the BBC, where he was earning at least £1.6 million, he thought about the words of his predecessor, the “great man ” Sir Terry Wogan.

Sir Terry had said “there may not ever be a right time to go but there could be a wrong time to stay,” Evans said.

Evans held back tears as he thanked his wife and family during an emotional final breakfast show on Radio 2.

The broadcaster has been at the BBC station since 2005 and in the breakfast slot since 2010.

He thanked his wife, Natasha Shishmanian, who he described as his “guiding light”.

Evans married Shishmanian, 38, in 2007 and the pair welcomed twins in September this year.

The former TFI Friday host said: “Thank you to my family for putting up with me, and for having someone in your personal orbit that does a job like this, particularly my daughter Jane.

“Thank you to you all for listening but most of all I would like to thank my wife Natasha, my gravity and my guiding light, for giving me enough certainty to feel confident enough to embark upon a bit of uncertainty again.

“It’s what I like. I crave the uncertainty but you can only do that against a backdrop of certainty and security. Uncertainty is where creativity lives. Comfort and creativity are not the greatest bedfellows, let me tell you. None of us look forward to saying goodbye to the things and people we love.”

Bucking tradition, Evans delivered his farewell speech at the halfway mark of the show, saying he wanted the programme to be “a right laugh” and not end on a “melancholy” note.

He said: “I know I’m not conforming but when has that ever stopped me in the past?”

Evans took over the breakfast slot following Sir Terry’s departure in December 2009. Before that, he landed one of the most sought-after jobs in the industry, the Radio 1 Breakfast Show, in 1995.

He returned to the airwaves as the host of Virgin Radio’s breakfast show. The DJ hosted the show from 1997 to 2001, when he was sacked for “breach of contract”, having failed to turn up for a week of shows.

On Monday morning’s show Evans thanked the BBC for having invited him back to play “that incredible music” once again.

He said: “Thank you to the BBC for supporting me, and trusting me with one of their precious microphones for the last years, for allowing me to grow every minute of every day that I have been on air.”

Listening figures were and have remained healthy, with Evans hosting the UK’s most popular radio programme in that time slot.