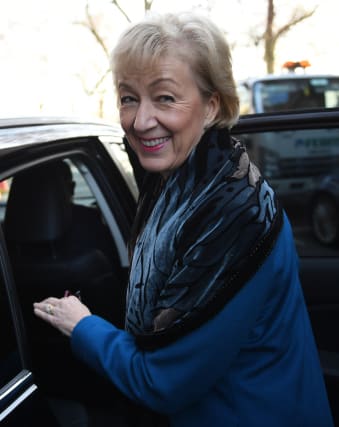 MPs who want to block a no-deal Brexit will have to either vote for Theresa May’s Withdrawal Agreement or a replacement to do it, Andrea Leadsom has warned.

The Brexiteer Commons Leader warned politicians lining up to block efforts to take the UK out of the EU in March without an alternative no-deal was the “legal default position”.

Her comments in an interview with the Sunday Telegraph came after she spoke in support of a “managed no-deal” as a possible alternative to the PM’s Withdrawal Agreement should it fail to pass the Commons in January’s planned vote.

In a sign of the widening splits in Tory thinking over no-deal, former chancellor George Osborne earlier warned that a no-deal Brexit could see the party stuck in opposition unless it abandoned the “reckless decision of hard Brexiteers”.

Three Tory MPs – Nick Boles, Anna Soubry and Sarah Wollaston – have warned they would resign the whip if a no-deal Brexit ever became official Government policy, and Justice Secretary David Gauke has suggested he would quit the Government.

Mrs Leadsom, who publicly supports Theresa May’s Brexit deal, told the Sunday Telegraph: “Parliament can always of course express a view, but in order to avoid a no-deal Brexit, Parliament does need to vote for a deal.”

She added: “The legal default position is that if there isn’t a deal then the UK leaves the EU in March 2019 without a deal.”

Theresa May’s Withdrawal Agreement is due to be voted on by MPs in January. But few expect it to be approved by a heavily divided Commons, and Tory MPs including Cabinet ministers appear to have begun to polarise between those who might support a no-deal Brexit and those who would actively battle against it.

However, Lib Dem MP Layla Moran, who supports the Best for Britain group backing a second referendum, insisted that MPs do have the power to stop a no-deal Brexit.

She said: “Is this really where the Brexiters have ended up? The merchants of ‘take back control’ have pivoted to ‘you can’t stop us from crashing the car’.

“This is a barking dog that will never bite. The reality is that Parliament can, and will, stop a no-deal Brexit. No politician worth their salt would allow such chaos and unnecessary harm.”

Earlier, Mr Osborne had launched a scathing attack on the Tories, warning that the party will not remain in power “unless it engages more with modern Britain” and changes direction on Brexit.

The politician-turned editor of the Evening Standard, who has been a vocal critic of Theresa May – who sacked him from the Cabinet in 2016 – also attacked the Prime Minister’s handling of negotiations.

He accused her of following a “Brexit means Brexit” ideology because she backed Remain at the 2016 referendum, “albeit sotto voce”, and therefore “had to prove her Brexit credentials”.

He told BBC Radio 4’s Today: “That was essentially a massive mistake by the Conservative administration, which it was punished for at the general election because the Conservative Party decided to embrace the Brexit result in such a way as to essentially dismiss the views of those who voted Remain, treat them as saboteurs or traitors, and run against urban Britain.”

Mr Osborne, who said he had warned then-PM David Cameron against holding the referendum in the first place, also attacked the “reckless decision of hard Brexiteers” to pursue a no-deal Brexit, saying: “I don’t think the country voted to mobilise the Army, stockpile medicine, hoard food and go around the world buying every fridge available.

“That is not what was offered and that is now what is happening.”