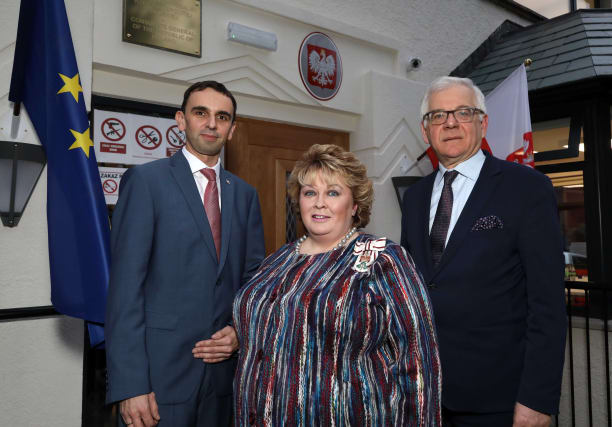 Jacek Czaputowicz said he hoped the move will help to strengthen cultural and economic ties between the two countries.

The Polish community is the largest immigrant community in Northern Ireland, with around 30,000 Poles living in the region.

The opening of the new consulate comes just a few weeks after the Polish ambassador to the UK, Arkady Rzegocki, visited Belfast for the first time.

During his visit, the ambassador gave a speech on the role of Poland in the European Union in the context of Brexit, attended a memorial service for the 303 (Polish) RAF Squadron which was stationed at Ballyhalbert in Co Down during the Second World War, and met political and civic leaders.

“Before Poland’s accession to the European Union in 2004, there were no more than 70,000 Polish citizens in the United Kingdom of Great Britain and Northern Ireland. Now the Polish form one of the biggest national minorities in the UK,” he said.

“The task of the consulate is also to enhance contacts between the businesses from Poland and Northern Ireland. We would like Belfast to be one of the centres of Polish-Northern Irish dialogue.”

The Polish Consul General in Northern Ireland Pawel Majewski added: “The opening of a new consulate here in Belfast is a clear indication of our commitment to maintaining and strengthening the bonds of friendship between the people of Poland and Northern Ireland.

“This new consulate will not only support the Polish community already living here but will also be an important bridge between our two countries.”