Gatwick Airport working to resume some flights amid drone chaos 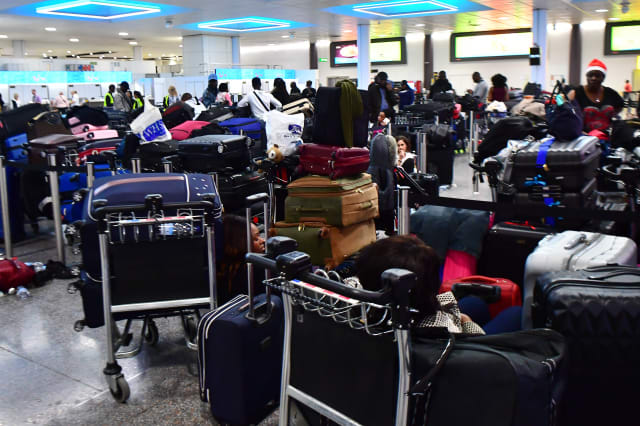 Passengers face further disruption at Gatwick on Friday after a drone flying close to the airfield forced the airport to shut down.

Flights in and out of the airport were suspended on Wednesday night, and tens of thousands of travellers faced chaos on Thursday as police worked to bring the drone down.

On Friday morning, the airport said it was working to “introduce a limited number of flights” over the coming hours, but urged passengers to check the status of their flight with their airline before travelling.

Police had earlier said shooting the drone down was a “tactical option” being considered.

Detective Chief Superintendent Jason Tingley, of Sussex Police, said there had been more than 50 sightings of the device in the 24 hours since 9pm on Wednesday, when the airport first closed.

Speaking to reporters outside the airport’s South Terminal on Thursday night, he said: “We will do what we can to take that drone out of the sky and remove that disruption so we can get Gatwick back to normal.

“One of the options is to use firearms officers if that presents itself – they have been out on the ground today and that’s a consideration and a tactical option that’s open to us.

“There are a number of factors in terms of range, the height of the drone and the likely impact on us firing at the drone but that is a tactical option open to the gold commander who will make a decision based on the information available to them at the time.”

Mr Tingley added police were working on the assumption the drone had been modified, with the “intent of causing disruption”, and were looking through CCTV to identify the make and model.

He said they were following up a “number of persons of interest” in their investigations, with the military drafted in to offer additional support to officers.

According to reports, one line of inquiry was that a lone wolf eco-warrior was behind the attack.

He refused to comment on the possibility of the airport awarding compensation to passengers who had been affected by the chaos.

He added: “The issue from my perspective is that this has been a criminal act purposefully undertaken in order to cause this disruption and I very much hope we bring the perpetrator to justice.”

The incident led to calls for more action to tackle illegal drone use.

The runway has been closed almost constantly since two drones were spotted being flown inside Gatwick’s perimeter at 9pm on Wednesday.

It was reopened at 3am on Thursday but was closed 45 minutes later after the drones re-emerged.

Transport Secretary Chris Grayling said there was no known motive for the pilot of the “commercial” drone.

Passengers faced severe disruption as flights were unable to leave the tarmac at Gatwick, while many inbound flights were diverted to alternative airports as far away as Amsterdam and Paris.