Christmas getaway in full flow amid warnings of disruption 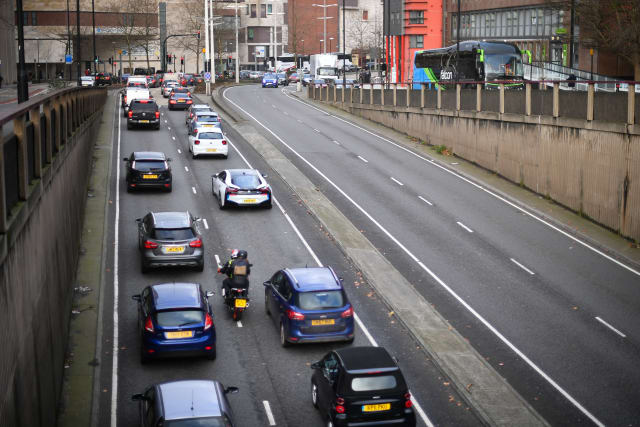 Millions of people are embarking on a Christmas getaway amid warnings of disruption to road, rail and air travel.

Drivers are being advised to defer journeys until after 7.30pm if possible as delays of up to nearly two hours are expected on popular routes.

The M25, M6 and M40 will be the worst traffic hotspots, according to research by the RAC and transport data firm Inrix.

Some 59% of UK drivers will take to main roads or motorways on Friday, an AA poll suggested.

Motorists driving to spend the festive period with friends and family are competing for road space with regular commuters.

Drivers travelling on the southbound M40 from the M42 (Warwickshire) to Junction 8A (Oxford) should expect delays of up to one hour and 50 minutes.

Highways England lifted more than 200 miles of roadworks on the country’s motorways and major A-roads by 6am to ensure more than 97% of its roads are open for the festive getaway.

Trains are busier than normal as passengers complete journeys before parts of the network are shut down for Christmas engineering work.

A fire at a substation near Ashford International station in Kent on Thursday night caused severe disruption as Network Rail had to evacuate a signalling centre.

Some lines have reopened but Southeastern services are expected to be disrupted until 5pm.

Network Rail is planning extensive engineering work across Britain between Sunday and January 1, with a 25,000-strong workforce carrying out 330 projects.

This will affect lines running into major stations such as London Paddington and London Victoria.

As usual, there will be no trains on Christmas Day and a limited service will run on Boxing Day.

Airports are also seeing a spike in demand, although the plans of tens of thousands of passengers have been thrown into disarray after Gatwick’s runway was shut due to drone activity on Wednesday night and most of Thursday.

The runway reopened on Friday morning but there were still knock-on delays.

Travel trade organisation Abta expects more than 4.7 million people to head abroad from the UK between December 18 and January 2, with Friday the busiest travel day.

Winter sun lovers are heading short-haul to Alicante, the Canary Islands and Egypt, while Dubai and India are among the most popular long-haul destinations.

Abta chief executive Mark Tanzer said: “Christmas and New Year are always very busy times for the travel industry as people head off to spend their well-earned holidays with family and friends.

“Whether holidaymakers are flying away for some winter sun, travelling to a snowy destination or staying closer to home, this year’s festive break looks set to be another busy one.

“It’s important people allow extra time for their journeys and check ahead for any disruption if travelling by public transport.”