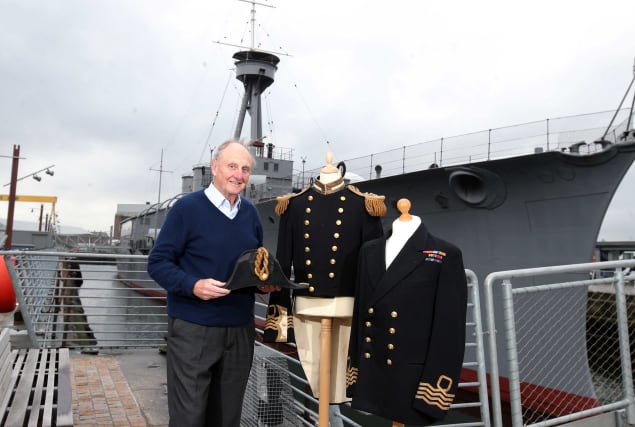 A former Northern Ireland minister has revealed his family links to HMS Caroline.

Sir Richard Needham, who served as Economy Minister in Northern Ireland from 1992-95, has loaned two historic naval uniforms which belonged to his uncle, a former commander of the Royal Navy war ship.

HMS Caroline is now permanently docked in Belfast and is open as a visitor attraction.

The ship, its dock, pump house and wharf recently underwent a £20 million refurbishment and restoration process to become a maritime museum.

The uniforms will form part of the ship’s collection of artefacts displayed on board and in the pump house visitor centre.

During the Second World War, HMS Caroline, then a training vessel for the Royal Naval Volunteer Reserve, was put back in service as a strategic communications centre for the North Atlantic Fleet throughout the war.

This was the second time in the ship’s life that it had participated in battle having played a key role for the Grand Fleet in the First World War at the battle of Jutland in 1916.

“I am very pleased to see the uniforms back where they came from,” he said.

“I have always been a supporter of Northern Ireland’s heritage, business and development ambitions, and am proud to be associated with the country’s history through family as well as through politics.”

Captain John Rees OBE, chief of staff at the National Museum of the Royal Navy and the director who took charge of the restoration programme, expressed deep gratitude to Sir Richard for the loan of the uniforms.

“HMS Caroline has spent almost 100 years of its life in Belfast and, in that time, connections made with local people in peace time as well as during war times remain strong as ever,” he said.

“The Kilmorey connection brings HMS Caroline even closer to the fabric of Northern Ireland and Ireland, and the role played by thousands of Irish people during both world wars.

“These uniforms are terrifically significant in telling that story.”