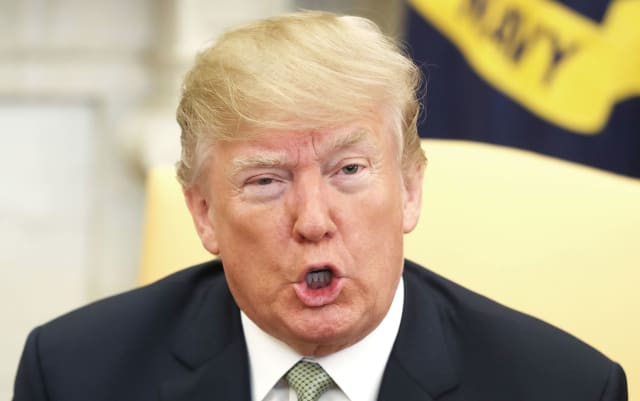 Donald Trump has once again called out social networks and internet giants for allegedly giving less prominence to him and fellow Republicans.

The US president renewed his claim that the likes of Facebook and Google are biased towards left-leaning Democratic voices across the internet, but singled out Twitter for making it harder for people to start following him on the social network.

“Twitter, in fact, has made it much more difficult for people to join @realDonaldTrump. They have removed many names & greatly slowed the level and speed of increase. They have acknowledged-done NOTHING!”

Twitter responded to the claims, saying that improvements to the platform have led to many prominent accounts seeing a fall in followers.

“Our focus is on the health of the service, and that includes work to remove fake accounts to prevent malicious behaviour,” a Twitter spokesman said.

“Many prominent accounts have seen follower counts drop, but the result is higher confidence that the followers they have are real, engaged people.”

Questions about the social network’s ability to censor have been the subject of intense debate over the last 12 months, but social media consultant Matt Navarra says it is highly unlikely that individuals could manually and intentionally alter how their platforms work because of the level of complexity and automation.

“The way social networks and search engines work is highly automated and based around complex algorithms,” Mr Navarra said.

“It would also be highly controversial and a huge PR risk to be found doing such things.”

However, Mr Navarra said there is an argument to be made that algorithms are the creation of these companies’ engineers.

“There is a risk of an unconscious or unintended bias being built into their platforms through the choices in what ‘signals’ they feed into algorithms, and how the signals are configured to be interpreted by the platform’s systems,” he continued.

“There has been some discussion about forcing platforms such as Facebook to be more transparent about how their algorithms work. So much so, that the UK Government has considered implementing an algorithm ethics agency to provide independent oversight of how the platforms operate.

“The challenge for the likes of Facebook and Google is Trump’s often exaggerated vitriol combined with his seemingly poor understanding or ignorance of the basics regarding how these platforms work.

“Unfortunately, being president means he has the power to make major changes which could have a significant impact on their business’s futures. Placating Trump to address his wild accusations is not an easy job. Getting him to accept he is wrong will be even harder.”

The US president has previously accused Twitter of “illegal” shadow banning prominent Republicans – an act where someone’s visibility to the public is reduced instead of completely blocking them, a practice which Twitter has long denied.