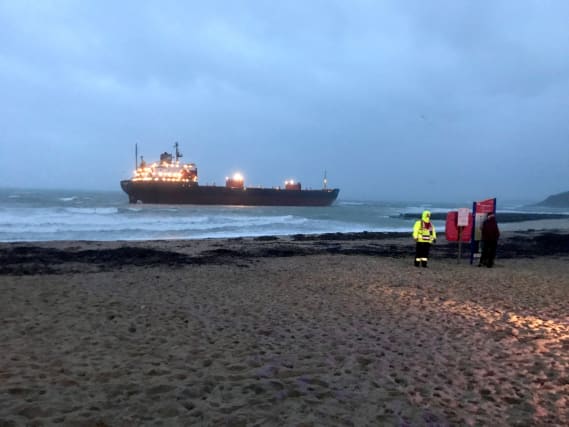 Major operations are under way after strong winds battering Britain saw a Russian cargo ship run aground off the Cornish coast and lorries overturn on a ferry in Scotland.

The 16,000-tonne Russian vessel Kuzma Minin grounded off Gyllyngvase Beach in Falmouth at about 5.40am on Tuesday, in what witnesses described as extreme and horrific weather.

Around two hours later at the Cairnryan ferry terminal, in Wigtownshire, six lorries overturned in high winds on a P&O ferry sailing from Larne in Northern Ireland.

No one is reported to have been injured in the incident and Police Scotland said all 52 passengers and 56 crew on board are safe and well and no-one was injured.

In Cornwall, the Maritime and Coastguard Agency (MCA) said the 590ft (180m) ship had dragged its anchor and has a list of about five degrees.

The vessel, which has 18 Russian crew on board, was not carrying any cargo.

The MCA, which with the police has declared a “major incident”, said an attempt will be made later today to re-float the ship when the tide rises.

Video footage released by the MCA shows winchman Niall Hanson being lowered down to the ship in 60mph winds.

Witnesses have taken pictures of the boat close to the shore.

The incident comes after the Met Office issued a yellow warning of severe weather with 65mph winds forecast.

Nigel Kitto, who lives locally, praised the work of the lifeboat and helicopter teams working in “horrific” conditions.

“The helicopter and lifeboat have been going in and out and it’s incredible to see – the skill of the helicopter pilot,” he said.

“The helicopter is going sideways here against the wind and struggling a bit.

“It’s amazing to watch but there are people on board so fingers crossed that everyone gets back to shore OK.”

“There are dangerous rocks down there and this brings up memories for everyone, I imagine,” Mr Kitto added.

“As you come over the crest of the hill there’s just this huge ship where there shouldn’t be,” she told the Press Association.

“Last night it was horrendously windy and now there’s gravel up by the road so it was a good high tide,” she added.

An HM Coastguard spokeswoman said: “There will be an attempt later today to re-float the Russian vessel which ran aground earlier this morning off Cornwall.

“HM Coastguard and Devon and Cornwall Police have declared a major incident due to the large number of people that use the beach and the disruption to traffic in the town.

“The Secretary of State’s Representative (SOSRep) Maritime Salvage and Intervention is closely monitoring the situation and the local Environment Group is also being kept informed.

“Tugs are on their way to the vessel and Falmouth RNLI all-weather lifeboat is standing by at the scene. Falmouth Coastguard Rescue Team have cordoned off an area around the ship.

“HM Coastguard Search and Rescue helicopter based at Newquay was used to transfer a marine pilot on to the vessel.