A 16,000-tonne Russian cargo ship that ran aground off the Cornish coast has been re-floated during high tide and will now undergo inspection.

The Kuzma Minin grounded off Gyllyngvase Beach in Falmouth at about 5.40am on Tuesday, in what was described as extreme and horrific weather. 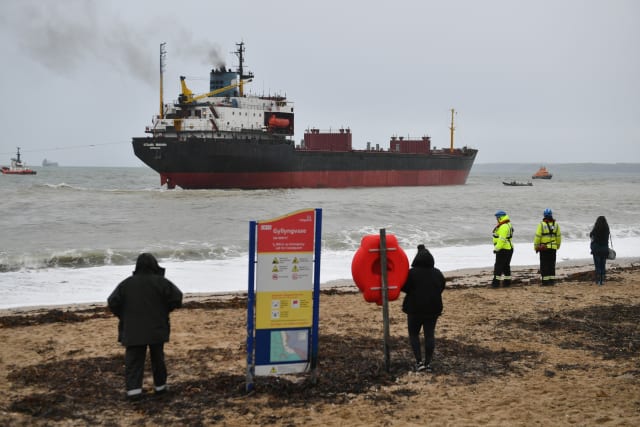 The vessel, which had 18 Russian crew on board, has now been taken to Falmouth Bay to be inspected.

Mark Sansom, Falmouth harbour master, said: "We can confirm that the Kuzma Minin – a 180 metre Russian bulk carrier – was successfully re-floated at 2.08pm.

"This has been a successful and well co-ordinated operation involving multiple agencies.

"We would like to recognise the outstanding performance of the pilot and of all vessel crews involved in what was a very demanding incident.

"The Kuzma Minin has been taken to Falmouth Bay to anchor, in order for it to be inspected.

"We are now discussing the future of the vessel with the Secretary of State's Representative (SOSRep) Maritime Salvage and Intervention and the vessel owners."

Mr Sansom confirmed there was no evidence of any pollution.

WATCH #HMCoastguard Winchman Niall Hanson, being lowered down to the #KuzmaMinin to assist the Harbour Pilot onboard. Seas remain rough with 60mph winds. Everyone #allsafe however Newquay Coastguard helicopter remains on standby. An attempt to refloat will be made later today. pic.twitter.com/WCS92nkOFs

The Maritime and Coastguard Agency (MCA) and Devon and Cornwall Police had declared a "major incident" but that has now ended.

Video footage released by the MCA showed winchman Niall Hanson being lowered down to the ship in 60mph winds.

Witnesses took pictures of the boat close to the shore and it came after the Met Office issued a yellow warning of severe weather with 65mph winds forecast.

Nigel Kitto, who lives locally, praised the work of the lifeboat and helicopter teams working in "horrific" conditions.

"The helicopter and lifeboat have been going in and out and it's incredible to see – the skill of the helicopter pilot," he said.

"The helicopter is going sideways here against the wind and struggling a bit.

"It's amazing to watch but there are people on board so fingers crossed that everyone gets back to shore OK."

"There are dangerous rocks down there and this brings up memories for everyone, I imagine," Mr Kitto added.

"As you come over the crest of the hill there's just this huge ship where there shouldn't be," she told the Press Association.

"Last night it was horrendously windy and now there's gravel up by the road so it was a good high tide," she added.

As the rescue operation was under way in Cornwall, the emergency services in Scotland were dealing with six lorries overturning on a P&O ferry sailing at Cairnryan ferry terminal, in Wigtownshire.

No one is reported to have been injured in the incident and Police Scotland said all 52 passengers and 56 crew on board are safe and well and no-one was injured.