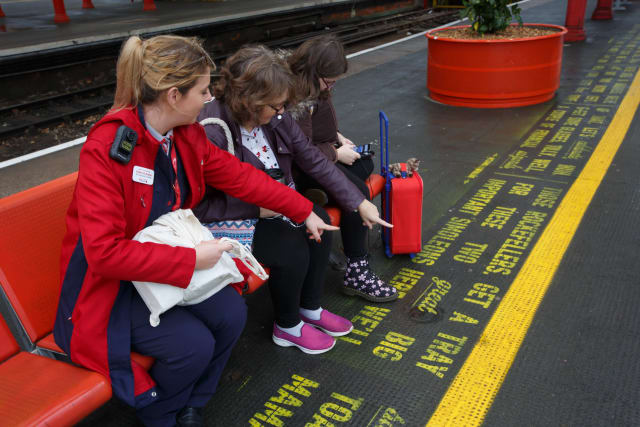 The script of It’s A Wonderful Life has been painted onto railway station platforms as part of a mental health festive campaign.

Over a three-week period, workers spent more than 60 hours painting over 4.5 miles of words overnight across the UK.

The initiative was developed with Virgin Trains’ charity partner Rethink Mental Illness in recognition of how difficult the festive period can be for some.

Colin Leslie at Rethink Mental Illness said: “At Christmas time in particular, we wanted to ensure people know that help is available if they need it.

“Over the past two years, our partnership with Virgin Trains has been designed to raise funds so that more people can access support in communities along the West Coast network.

“This campaign has helped draw attention to such an important issue, and we can only help that the message of kindness continues to land long after the paint is gone.”

Frank Capra’s 1946 film, a regular fixture in living rooms across the festive period, is a story of family, love, hope, and redemption.

But it is also the story of one man’s struggle with life’s knock-backs and disappointments.

The script has stretched its way up the UK to spread the film’s message of goodwill in locations including Birmingham, Liverpool, Preston, Carlisle and Glasgow.

Natasha Grice, executive director of people at Virgin Trains, added: “Across our rail network, many of our people have been personally affected by the issues touched on in this campaign, which is why we are delighted to have included so many of them in making it happen.

“Now the last drop of paint has dried in Glasgow, we hope that as many as people as possible continue to access the important support available through Rethink Mental Illness.”