Consumers hit the shops – but weekend footfall down on last year 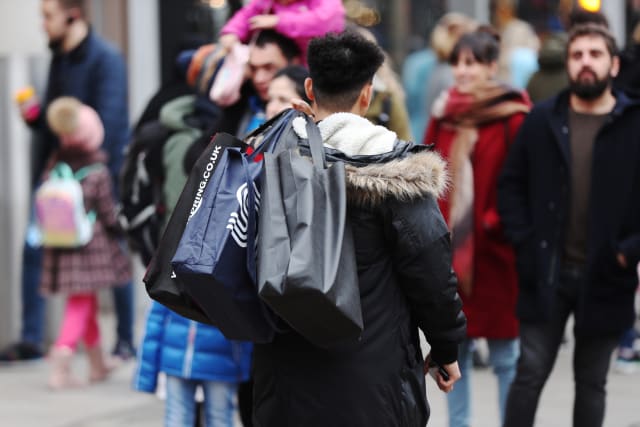 Christmas shoppers ventured out in greater numbers on Sunday after Storm Deirdre passed – but the weekend’s overall footfall remains down on this time last year.

High streets across the UK saw a small boost, with the number of shoppers up 0.8% on the same day in 2017.

It followed a bleak Saturday slump, with gales, heavy snow and freezing rain in many parts of the country blamed for disappointing figures.

But Sunday’s marginal rise was not enough to save the weekend’s overall footfall, retail intelligence experts Springboard said.

Combined footfall for high streets, retail parks and shopping centres was down 4.3% on the same weekend last year, their figures suggested.

Diane Wehrle, Springboard marketing and insights director, said only some consumers may have been able to defer their shopping trips to Sunday, making it hard for retailers to make up the overall spend.

She said: “This result is poorer than the same weekend last year when footfall declined by an average of 3.8% over the two-day Saturday/Sunday period.

“While the improved footfall today is made up of shoppers deferring trips from Saturday, the fact that the result is only flat with last year indicates that many trips planned for this weekend simply did not happen.

“Unfortunately the loss of spend is inevitable as many consumers will have made plans for Sunday that could not be altered, and this is a trend that Springboard has identified before – when footfall declines on a particular day due to poor weather it is not all regained on the subsequent day.”

Ms Wehrle said she classed this weekend as the peak trading weekend for retailers in the run-up to Christmas and added that while some may choose to hit the shops this week and next weekend instead, it is likely others will have decided to buy their items online.

Aside from effects of the weather, she said a lack of consumer confidence lies at the heart of a lower spend both in shops and online.

“It (footfall) may come back a little bit this week but I’m not anticipating a huge uplift because I think the factors underpinning the reasons for why footfall has dropped are more significant,” she said.

“They are more based on economic constraints than weather. The lack of spend either online or in bricks and mortar stores is down to the lack of consumer confidence and the nervousness consumers are feeling and the fact we had a year where wages weren’t keeping pace with prices.”