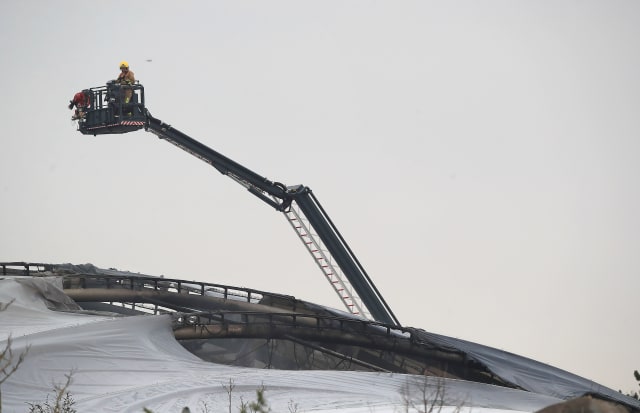 Chester Zoo has said it is “devastated” by the loss of some of its animals in yesterday’s fire, as supporters helped it smash a fundraising target.

Members of the public donated more than £50,000 online in little more than 24 hours since the blaze began on Saturday.

The money will help the zoo recover from the fire that destroyed much of the vast roof covering its Monsoon Forest area.

In a statement on the zoo’s website, chief operating officer Jamie Christon said the fire was one of the “toughest days” in its history.

He said no staff or public were harmed in the fire that was eventually brought under control by Cheshire Fire and Rescue Service crews.

Visitors were evacuated and keepers were able to move all the zoo’s mammal species to safety – including its group of critically endangered Sumatran orangutans, Sulawesi macaques, endangered silvery gibbons and birds such as rhinoceros hornbills.

Mr Christon said: “We are though, devastated to say that we were unable to save some of our insects, frogs, fish and small birds who were located near to the outbreak of the fire.

“It’s absolutely heartbreaking to lose any animal, especially when conservationists have worked so hard to breed these wonderful species.

“New homes have been found within the zoo for all of the animals that were led to safety and our teams are working around the clock to relocate them as soon as possible.”

Zoo staff had been working to account for all species at the attraction after the blaze tore through the plastic material covering the Monsoon Forest enclosure.

Orangutans, gibbons, crocodiles, turtles and exotic birds were among the species housed in the artificial habitat designed to mimic a south-east Asian environment.

The zoo, which planned to open on Sunday, said it had been inundated with messages from people asking how they could lend their support.

Mr Christon wrote: “The strength and support from the public has been incredibly overwhelming and the messages of goodwill have been of great comfort to our teams.

“We will support each other in rebuilding this part of the zoo and continue our mission of preventing extinction.”

Cheshire Fire and Rescue Service declared a major incident after it was called to the zoo fire shortly before 11.30am on Saturday, sending 15 fire engines to the scene.

Eyewitnesses described how visitors to the attraction – billed as the largest indoor zoo exhibit in the UK – were rushed to safety as the blaze spread rapidly through the polymer roofing material.

David Clough, 50, who lives across the road from the zoo, said high winds fanned the flames in the roof of the building.

He added: “We were very worried for the people and animals that would have been in the building.”

One person was treated for smoke inhalation as a result of the fire, according to North West Ambulance Service.

Thanking the emergency services, Mr Christon said the cause of the fire was currently unknown and the zoo would be working with the relevant authorities with their investigations.