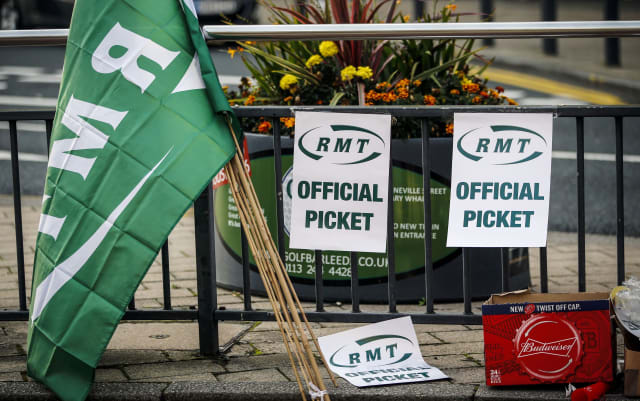 Christmas shoppers were hit by travel disruption on Saturday when rail workers staged their 40th strike in the bitter dispute over guards on trains.

Members of the Rail, Maritime and Transport union on Arriva Rail North (Northern) were said to be solidly supporting the walkout.

Picket lines were mounted outside stations across the region and the union maintained it was receiving public support for its campaign.

Strikes will be held on every Saturday for the rest of the month, while action will also hit South Western Railway later this month, including New Year’s Eve, in the same dispute.

Northern called on the RMT to suspend its strike action and return to talks at Acas, saying the union had made agreements with other train operators that it refuses to discuss with the company.

Managing director David Brown said: “By the end of December we will have had 19 consecutive Saturdays of RMT strike action.

“This targeted action disrupts our customers’ lives, but as we enter a vital period for businesses, it also damages the economic wellbeing of the north of England.

“We have fantastic colleagues who have supported customers by keeping our trains running on each of the RMT strike days.

We are aiming to keep as many people moving as possible and ensuring customers can still travel into the biggest towns and cities for the big seasonal events including Christmas markets – but with very few services running after 5pm.

“We expect all of our services, and those of other operators, to be extremely busy and are calling on our customers to plan their travel carefully for the weekend, check the new timetables well in advance, and make sure they do not rely on the last trains home.”

The union claimed the Government is assessing a request by Northern to be reimbursed for the cost of the strikes.

General secretary Mick Cash said: “This scandalous state of affairs means that not only are Arriva Rail North to be paid by the Government when they are not running trains on strike days, it also means the company have no financial incentive to settle the dispute.

“What is worse, it is estimated the cost of the bailout to-date up to Christmas will be over £24 million, enough to pay for the 3.1% New Year fare freeze recommended by MPs almost three times over.”