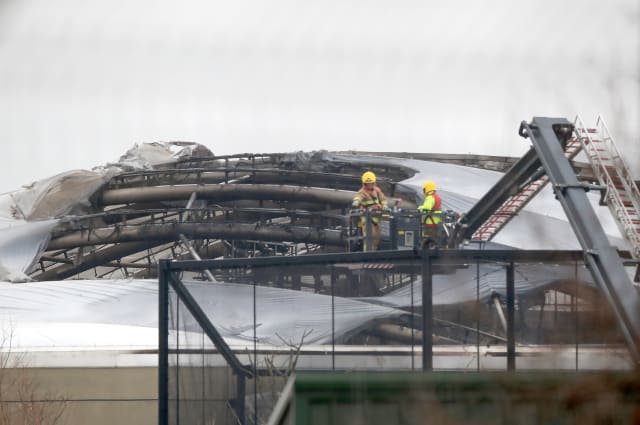 Zoo staff are working to account for all species after fire destroyed much of the vast plastic roof covering Chester Zoo’s Monsoon Forest area.

All the mammals have been located but keepers are “working hard” to track down the rest of the animals, according to a statement released by the zoo on Saturday.

Eyewitnesses described how visitors to the attraction – billed as the largest indoor zoo exhibit in the UK – were rushed to safety as the blaze spread rapidly through the polymer roofing material.

Zoo staff led the animals housed in the structure to safety as firefighters rushed to the scene.

Orangutans, gibbons, crocodiles, turtles and exotic birds are among the species housed in the Monsoon Forest, which recreates a tropical south east Asian environment.

The zoo said in a statement: “Critically endangered Sumatran orangutans and other mammals are all accounted for.

“We are working hard to account for all other species.”

One person was treated for smoke inhalation as a result of the fire, according to North West Ambulance Service.

One eyewitness, David Clough, 50, who lives across the road from the zoo, said high winds fanned the flames in the roof of the building.

He added: “We were very worried for the people and animals that would have been in the building.”

He added: “Orangutans and gibbons are our nearest neighbours there, but there are many other animals, including free-flying birds.

“It was spreading across the roof in strong winds for a while.

Their statement added: “Visitors were evacuated and the zoo’s response team worked alongside the emergency services to help bring the situation under control.”

A visitor, who declined to be named, told the Press Association: “We were in the monsoon enclosure when it happened and were rushed out due to an electrical fire. It spread very quickly.

“The staff ensured all the members of the public were safe. Many staff (were) running towards the fire, (I’m) assuming to help with evacuating animals.

“The entire zoo is closed – a shame as we’ve travelled up from Plymouth.”